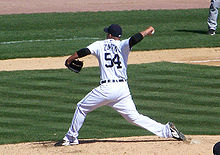 Joel Zumaya was one of the hardest-throwing pitchers in Major League Baseball, regularly topping 100 mph. The 11th-round pick of the Detroit Tigers in the 2002 amateur draft, Joel was signed by scout Rob Wilfong and began his career with the GCL Tigers, going 2-1 with a 1.93 ERA, 46 K in 37 1/3 IP and a .162 opponent batting average. Baseball America named him the #15 prospect in the Gulf Coast League.

Zumaya was back on track in 2005. At age 20, he had a 8-3, 2.77 line for Erie, allowing a .187 average and 11.99 K/9. He was 1-2, 2.66 with the Toledo Mud Hens, striking out 11.45 per nine and allowing a .194 average. He pitched a scoreless inning in the 2005 Futures Game for the USA team. He was second among minor league starters with 11.86 strikeouts per nine, his 15 Ks in a game tied for the most in the minors and he was second to Francisco Liriano (204-199) in strikeouts on the farm. Baseball America rated him the top pitching prospect in the Eastern League in their tools list, but only 6th among EL pitchers and 10th overall in the circuit in their top prospects list. He was also rated as having the best fastball in the circuit and made the EL All-Star team. His four balks tied for the most in the loop.

As a rookie in the majors, Zumaya was 6-3 with a save and 1.94 ERA after being converted to a reliever by the Tigers in 2006. He only allowed 6.05 H/9 while fanning 10.48 per nine but walked a batter almost every other inning. He pitched in all three rounds of the postseason, getting two scoreless innings against the New York Yankees in the ALDS, and then giving up a run in his only inning of work facing the Oakland A's in the 2006 ALCS. In the 2006 World Series, he pitched three times against the St. Louis Cardinals. He gave up two unearned runs in Game 3 after making a key throwing error following walks to the first two batters in the 7th inning, then he was charged with the loss in Game 4 when he once again walked the leadoff batter with the score tied in the bottom of the 8th, then gave up a two-out double to David Eckstein for a 5-4 loss. He had to miss three games during the postseason because of an unusual injury, a wrist inflammation suffered because of playing an excessive amount of the game "Guitar Hero".

He was 1-1 with a save and a 3.63 ERA in his first 13 games of 2007 before a ruptured tendon in his right middle finger sidelined him for several months. He only pitched 28 games in the majors that year, going 2-3 with one save and a 4.28 ERA. Zumaya suffered more bad luck in the off-season. He was helping clear items out of his parents' home in California when wildfires were encroaching. A heavy box landed on Zumaya's shoulder. He needed surgery and did not pitch again until mid-2008. He went 0-2, 3.47 in 21 games, but struggled with his control, walking 22 with as many strikeouts in 23 1/3 innings. In 2009, he was limited to 29 major league games by a wrist injury and was only 3-3, 4.94. His control improved a bit, but was still problematic, with 30 Ks but 22 walks in 31 innings. He seemed to have put it all back together in 2010, as he was 2-1, 2.58 in 31 games in the early going. Even better, he was no longer walking everyone in sight: in 38 1/3 innings, he had 34 Ks but gave up only 11 walks and 32 hits. He seemed to be back to where he had been in his rookie season, but everything came crashing down on June 28th as something in his pitching elbow snapped with a loud pop as he was delivering a pitch and he had to leave the game, bent over in pain. He had broken a bone in his elbow due to the sheer violence of his pitching motion. He would be out for the remainder of 2010 and all of 2011.

Zumaya was signed by the Minnesota Twins for 2012, in a gamble that he could regain the velocity of his previous years. His comeback attempt lasted all of 13 pitches. In his first batting practice session of spring training on February 25th, he felt something snap in his elbow and had to leave, once again in great pain. The next day, he was diagnosed with a ruptured ulnar collateral ligament. He was facing Tommy John surgery and another long rehabilitation before thinking of another comeback. Instead, he opted to retire.

His brother, pitcher Richard Zumaya, was also drafted by the Tigers in the 2007 amateur draft.