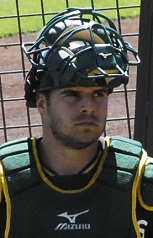 Catcher Josh Phegley made his major league debut in 2013.

He hit .592 with 13 home runs and 50 RBI as a high school senior to win the Indiana Mr. Baseball Award. He batted only .232/.293/.289 as a college freshman at Indiana University. As a sophomore, however, he had a superb season, batting .438/.507/.746 with 20 doubles, 15 home runs, 69 runs and 80 RBI in 61 games. His first career home run came on a day he hit for the cycle. He led the Big Ten Conference in average, OBP, OPS, total bases (167) and RBI, was second in runs, slugging and hits (one behind Eric Roof) and third in doubles and home runs. He was named the All-Conference catcher but lost Player of the Year honors to Nate Recknagel. In NCAA Division I, he tied Chris Shehan for second in average (behind Buster Posey), tied Tyron Childress for 21st in OBP, tied Kyle Conley for 18th in slugging and was 15th in RBI. He was named second-team All-American by Collegiate Baseball and the American Baseball Coaches Association, with Posey picked to the first team ahead of him. Baseball America did not pick him for any of their three All-American squads, going with Posey, Corey Kemp and Jason Castro instead.

He was chosen by the Chicago White Sox with the 38th overall pick in the 2009 amateur draft. The pick was Chicago's second, after Jared Mitchell, and was compensation for the loss of Orlando Cabrera to free agency. He was signed by scout Mike Shirley and began his career that summer with the Kannapolis Intimidators, hitting 9 home runs in 52 games. His batting line was only .224/.277/.408 due to poor contact, but he threw out 58% of attempted base thieves. Baseball America did not name him among the South Atlantic League's top 20 prospects though four others catchers were picked (Tony Sanchez, Derek Norris, Tim Federowicz, Travis d'Arnaud).

However, his progress was slowed the following year after being diagnosed with a blood disorder. He did well enough when healthy, hitting .284/.328/.415 between three stops and making it to the AA Birmingham Barons; he threw out 46% of would-be stealers. He bounced back in terms of health though his production was down in 2011, starting the year with the Barons before being promoted to the AAA Charlotte Knights in July. He hit a combined .242/.298/.368 and had 20 passed balls, though he continued to show a good arm (43% CS). He led Southern League backstops in putouts (620) and passed balls (16).

Phegley received the call to the Show from the White Sox on July 5, 2013. He was hitting .316/.368/.597 with 18 doubles and 15 homers (among the top 10 in the 2013 IL in dingers and slugging) with Charlotte, while starter Tyler Flowers was hitting only .208 in Chicago. He made his debut as the starter against the Tampa Bay Rays that day going 1 for 3 with a pair of RBI in an 8-3 loss. He singled off Jeremy Hellickson in the 5th inning to drive in Gordon Beckham with his first big league hit in the 5th, then added a sacrifice fly in the 9th. He hit his first big league homer in his second game, against David Price of the Rays on July 7th, hit another long ball the next day, and on July 11th launched his first career grand slam, connecting off Anibal Sanchez of the Detroit Tigers in a 6-3 win. Phegley had been initially picked for the 2013 Futures Game but was replaced by James McCann due to his call-up. he cooled down after his hot start, however, and ended up with a .206 average, 4 homers and 22 RBIs in 65 games. He was back in the minor leagues for most of 2014, hitting .274 with 23 homers and 75 RBIs in 107 games for Charlotte. He also played 11 games for Chicago, but was limited to a .216 average although he did hit 3 homers and drive in 7 runs.

In December 2014, Phegley was traded to the Oakland Athletics with infielder Marcus Semien, right-hander Chris Bassitt, catcher Rangel Ravelo and for Jeff Samardzija and Michael Ynoa.

On May 3, 2019, he set an Athletics team record for most RBIs in a game by a catcher when he drove in 8 runs in a 14-1 win over the Pittsburgh Pirates. He had two bases-clearing doubles, a run-scoring single, and topped his night with a solo homer in the 9th inning.

He announced his retirement in February of 2021.