Frédéric Hanvi was the second French-born and -raised player in the US minors, following Joris Bert. He has also played in the Japanese independent leagues and won two French home run titles. 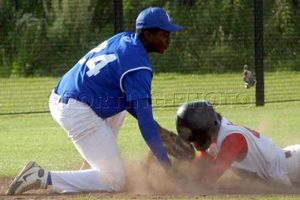 Let go by the Twins, he returned to France, now with the Templiers de Sénart. He dominated the league in 2011, hitting .333/.467/.626 with 24 RBI, 34 runs, 20 walks and 8 homers in 25 games, stealing 8 bases in 10 tries. He fielded .937, playing primarily C (splitting time with Ernesto Martínez) and 2B (splitting time with Felix Brown), though he also saw action at P, SS and OF. He was 3rd in the French Division I in slugging (Division Élite having been renamed), tied Florian Peyrichou for second in runs (7 behind Pierrick Lemestre), 8th in OBP (between Lemestre and Douglas Rodriguez), tied Anthony Cros and Jean-Michel Mayeur for 6th in RBI, led in home runs (one ahead of Kevin Atkinson), tied Lemestre for 3rd with 60 total bases, was 4th in walks (between Mayeur and Sébastien Morgavi) but tied for first with 34 whiffs.

He and Brown joined the Gunma Diamond Pegasus of Japan's Baseball Challenge League in 2012; Hanvi was 5 for 10 with a double and a homer in his brief time with the 2012 Templiers back in France. He made his debut for the senior French national team in the 2012 European Championship, starting in left field for France. The 23-year-old hit .368/.435/.526 with 5 runs and 5 RBI in 6 games, handling 12 putouts and one assist without making an error. He led France in OBP and runs (one ahead of Yann Dal Zotto) and was second in RBI (one behind Luc Piquet). He was a leader in both of France's wins, scoring twice in a 3-1 win over Great Britain and going 4 for 5 with 3 runs and 3 RBI in a 9-8 win over Belgium. He ended the game against Belgium in dramatic fashion, homering off Yannick Gontier in the bottom of the 9th to end it. It was France's lone homer of those Euros.

For 2014, he signed with the Kochi Fighting Dogs of the Shikoku-Kyūshū Island League for a second stint in a Japanese independent league. He had a try-out with the Hanshin Tigers of Japan's Central League after his performance there, but was not signed by Hanshin. He hit only .207/.281/.414 in the 2014 European Championship, with 2 homers (both off Britain, coming off Jake Esch and Paul Waterman, both tying the game in an eventual win), 5 runs and 6 RBI. He tied Brown for second on the team in RBI, 3 behind Leveret. He had 14 putouts and one assist as France's starting center fielder. He led the Euros with 11 whiffs and two caught stealing (tied).

He signed with the Trois-Rivières Aigles of the Canadian-American Association for 2015, a popular league for French national team players (Leveret, Brown and Maxime Lefevre having all played there). He struggled, hitting .179/.172/.321 with 15 K in 28 AB. He returned to Sénart, having missed the 2015 European Cup while in Canada, and hit .380/.416/.549 with 19 runs and 19 RBI in 18 games, fielding .974 and tossing three shutout innings (1 H, 0 BB). If he had qualified, he would have been 6th in France's Division I in average and slugging.

In March 2016, he was in center field for France again, in the 2017 World Baseball Classic Qualifiers. He was France's top hitter, going 5 for 10 with 3 doubles, 3 runs and two RBI. He led the team in hits (one more than Rodriguez and Brown), average (.125 over Martínez), OBP (.045 ahead of Martínez), slugging (.244 better than Leveret), runs (tied with Andy Paz) and doubles (no one else on the team had any) and tied Paz for second in RBI (one behind Martínez). He was 2 for 4 with a double (off Rogelio Armenteros) and two runs in France's 5-3 upset win over Spain, which was trying to defend its spot from the 2013 World Baseball Classic. It was France's first win ever in a World Baseball Classic Qualifier. He then doubled in Brown off Dario Agrazal in the 1st inning of the semifinals against host Panama and scored on a hit by Paz but France fell, 7-4. For the first three WBC qualifiers (the fourth being held months later), he tied Logan Wade and Dwight Britton for second in doubles, one behind Trent Oeltjen; he led the Panama pool. He tied Carlos Ruiz for the most hits in the Panama pool, tied for 4th in the first three Qualifiers. He tied Bruce Maxwell for second in the Panama pool in average, behind only Jesús Golindano and ahead of former or current major leaguers like Ruiz, Donald Lutz, Engel Beltre, Dilson Herrera and Luis Martinez. He was 4th in the pool in slugging, behind Ruiz, Maxwell and Javy Guerra and 3rd in OPS (after Maxwell and Ruiz).