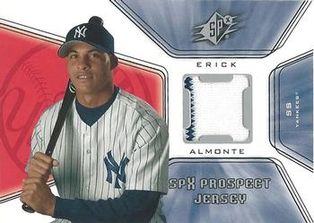 Erick Almonte is the brother of Hector Almonte. He returned to the majors in 2011 after having been absent for seven seasons.

In 2000, Almonte made it to Double A and had a solid year for the Norwich Navigators, hitting .271/.326/.427 with 16 homers, 77 RBI and 12 steals in 14 tries. He led Eastern League shortstops with 33 errors. Baseball America ranked him the Yankees' 7th best prospect. In the Arizona Fall League, he hit .301/?/.515 and made the All-Star team for the Maryvale Saguaros. Almonte spent 3 games in 2001 with Norwich (.250/.308/.250) but spent most of the year with the Columbus Clippers, hitting .287/.369/.464. He led International League shortstops with 27 errors. Baseball America rated him the IL's 8th-best prospect, ahead of fellow infielders Joe Crede, Marcus Giles and Brian Roberts and 8th in the Yankees chain. He got a September call-up and went 2 for 4 with a double and two steals in 8 games. In his first game, he was a defensive substitute, handling a Shannon Stewart grounder in his first inning of work. In his first at-bat, he singled to left against Chris Carpenter.

Moving to Japan for 2005, Almonte struggled with the Nippon Ham Fighters, only hitting .193/.330/.318 with 27 strikeouts in 88 at bats. Makoto Kaneko reclaimed the starting shortstop role during the year. In 2006, he played for the Long Island Ducks of the independent Atlantic League, hitting .302/?/.448 with 73 runs, 77 RBI and 16 steals. He tied fellow former big leaguers Ryan Radmanovich and Reggie Taylor for 7th in the league in average. In 2007, Almonte attended spring training with the Colorado Rockies, playing each of the four positions infield positions. After being released, Almonte signed with the Detroit Tigers and was assigned to their Double A affiliate, the Erie SeaWolves. He played in 50 games with them, and also 38 games with the Toledo Mud Hens, hitting a combined .286 with 44 RBI in 88 games. He spent all of 2008 with the Mud Hens, hitting .258 with 10 home runs and 50 RBI. Almonte was signed by the Milwaukee Brewers for the 2009 season and assigned to their Triple A team, the Nashville Sounds. In 105 games (only 277 plate appearances) with them, he hit .291 with 31 RBI. With Nashville again in 2010, Almonte hit .320 with 38 RBI in 110 games.

He made the Brewers' Opening Day roster for 2011, appearing in the majors for the first time since 2003 when he pinch-hit for Mark Kotsay on March 31. On April 2, he hit his first big league home run in nearly a decade when he took Cincinnati Reds pitcher Travis Wood deep in the fifth inning of a 4-2 Brewers loss. On April 26th, he was struck in the face by a thrown ball during batting practice and became the first player to be subject to Major League Baseball's new concussion policy. He was placed on the 7-day disabled list, suffering from dizziness and loss of appetite. He was only authorized to resume physical activity on May 9th. He was only hitting .103 in 16 games at the time of the injury, and was moved to the regular disabled list when the after-effects of the concussion were deemed over. He never returned to the majors, but did hit .303/.380/.447 in 83 games for Nashville in 2011.