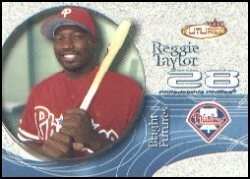 Once a highly-regarded prospect for the Philadelphia Phillies, Reggie Taylor ended his career in 2010 with the independent Lancaster Barnstormers of the Atlantic League. In the minors, Reggie posted strong power and speed numbers, though he also struck out a lot. Taylor also had a strong arm and played solid defense. He was the 14th overall selection of the 1995 amateur draft and was signed by scout Roy Tanner.

In 1999 for the AA Reading Phillies, he posted average numbers - .266/.296/.422 - but finished with 10 triples, 15 home runs and 23 stolen bases. In short-term call-ups in 2000 and 2001, he failed to impress. By spring training of 2002, Taylor was out of minor league options and had no place on the team. Days before the season started, he was traded to the Cincinnati Reds for reliever Hector Mercado. Taylor got playing time for the Reds, but once again posted poor numbers.

In 2004 he was released by the Reds, and signed a minor league contract with the Chicago White Sox. Taylor finally found his groove - in 58 games he batted .290/.357/.514 with 11 stolen bases, but was released the following off-season. Taylor caught on with the Colorado Rockies, but played in only 1 game with the AAA Colorado Springs Sky Sox. He then played for the Memphis Redbirds, the AAA affiliate of the St. Louis Cardinals, then for the Durham Bulls, the AAA affiliate of the Tampa Bay Devil Rays. Taylor earned 11 games with the big league D-Rays in 2005, but once again posted poor numbers and did not return to the Show after that.

Taylor later played in the Atlantic League and Mexican League.

In the 2008 Caribbean Series, he was 2 for 24 with 1 triple, 7 strikeouts and 1 walk for the Yaquis de Obregon, posting the second-worst OPS on the team. He did hit a key triple to help them win their final game, tying for third instead of finishing in sole possession of last place.