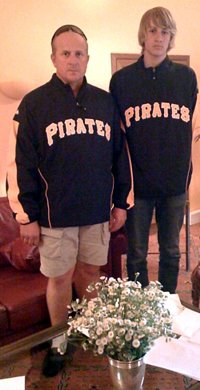 He appeared in the 2009 MLB European Academy. Dovydas played baseball in Lithuania for the Sporto Vilkai BC (Sports Wolves) and Vilnius Baseball Clubs. Besides pitching, he also caught and played third base. In 2009, he played for the Lithuanian U16 National Team at the Senior League European Finals in Ramstein, Germany. He hit a home run in game two of the tournament.

He pitched in the Florida Instructional League Program during the fall of 2009 and joined the Pirates in minor league Spring Training in 2010. He made his pro debut on June 22, 2010, for the GCL Pirates, allowing two hits, a walk and two runs in 2 1/3 innings against the GCL Yankees; he whiffed two. Overall, he pitched in 6 games, giving up 14 hits and 6 runs in 10 innings, striking out 6 and walking 5. All of his appearances were on the mound, where his professional future appears to be for now. He returned to the same club in 2011, going 3-1 with a 3.24 ERA in 10 games.

Neverauskas was part of the regular rotation for the 2013 Jamestown Jammers, going 4-4 with a 4.01 ERA. He hit 10 batters, most in the New York-Penn League. In his first full-season league, he posted a 6-12, 5.60 record for the 2014 West Virginia Power. He tied Luke Farrell for 3rd in the South Atlantic League in losses and was 3rd with 77 earned runs. Among Pirates farmhands, only Adam Wilk had more losses and no one had more wild pitches than his 16.

Moving to the bullpen during 2015, he showed good progress with the Power (1-2, 2 Sv, 3.65 in 18 G), West Virginia Black Bears (1-0, 2 R in 2 1/3 IP) and Bradenton Marauders (4 Sv, 1.62 in 12 G). He started 2016 effectively in AA with the Altoona Curve (1-0, Sv, 2.57, 32 K in 28 IP, .129 opponent average in 22 G). He moved up to AAA with the Indianapolis Indians (1-1, 3 Sv, 2.08 in 9 G) and made the World team for the 2016 Futures Game. He made the Futures Game before any other Lithuanian had even signed with a MLB team. He did well in the game, relieving Jharel Cotton with a 4-3 lead over the US in the bottom of the 8th. He allowed a Ryon Healy single but then got both Dominic Smith and Hunter Dozier to hit into force plays at second. After a steal by Dozier, he retired Willie Calhoun. Adalberto Mejia closed out the win. He finished the year 3-4 with four saves and a 3.60 ERA for Indianapolis. He was arrested in late August due to a barroom brawl; also arrested were teammate Gift Ngoepe (trying to become the first South African in the majors, just as Neverauskas was trying to make it from Lithuania) and Warwick Saupold of the Toledo Mud Hens. That may have cost him a chance at a September call-up. He began 2017 back with the Indians (3 UER in 8 1/3 IP, Sv).

Dovydas was called up to the major leagues on April 24, 2017, when OF Adam Frazier was placed on the disabled list. He made his debut that very night, facing the Chicago Cubs, in a game in which Pirates starter Chad Kuhl had had to leave in the 2nd inning after giving up 9 runs. He pitched the 8th and 9th innings of the 14-3 loss, giving up 1 run on a couple of hits, the result of of Albert Almora greeting him with a double and Kris Bryant following with a single; after that shaky start, though, he got Anthony Rizzo to ground into a double play, scoring Almora, and struck out Justin Grimm before getting the Cubs on three fly balls in the 9th. He was sent down shortly thereafter to make room for Ngoepe, another pioneer. Neverauskas was the first pitcher to make the majors from the MLB European Academy. He came back to pitch a couple more times in June, then was in the big leagues for a more extended stay starting on August 3rd. he did not give up any runs in his first three outings after that latest call-up, culminating on August 6th with his first major league win against the San Diego Padres. In that game, he came in to pitch in the top of the 11th with the game tied at 4 and pitched two scoreless innings, striking out three batters, being handed the win when Sean Rodriguez led off the bottom of the 12th with a homer off Buddy Baumann. His first loss also came in an extra-inning affair, when he surrendered a game-winning homer to Yasiel Puig in the 12th inning of a 6-5 loss to the Los Angeles Dodgers on August 21st. He was 1-1, 3.91 in 24 appearances for Pittsburgh, all in relief, striking out 17 in 25 1/3 innings.

With the COVID-19 pandemic, there were no minor leagues in 2020. New manager Derek Shelton gave him a long look but he again struggled in The Show (0-3, 7.11, 5 HR in 19 IP). After the season, he was released and signed with the Hiroshima Carp, hoping to rebuild his career in Asia.

Dovydas throws an 90-97 mph fastball, and also uses a curveball and a changeup in his pitching. While Dovydas was the first player born in Lithuania to appear in the big leagues, he was not the first player of Lithuanian background to do so: Joe Zapustas, ethnically Lithuanian but born in what is nearby present-day Latvia reached the majors in the 1930s, as did Joe Krakauskas, born in Quebec to Lithuanian parents.

Dovydas currently lives in Vilnius with his family. He comes from an athletic family; his mother was a professional basketball player and his father, Virmidas, was a pioneer in the early days of baseball in Lithuania. His father is also the head coach of the Vilnius Baseball Club as well as Head Coach for the Lithuanian U18, U16, and U14 National Teams.

"He's a 16 year old with a classic pro pitcher's body, long and loose, and has made huge progress since the summer of 2008. The sky is the limit with Dovydas, and I honestly believe he was the best pitching prospect to come out of Europe this year. I truly believe he has the arm to be a major league pitcher." Tom Randolph, International Scout for the Pittsburgh Pirates who brokered the deal between the Pirates and Neverauskas