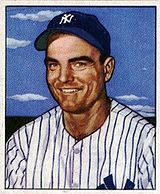 After graduating from Long Beach Jordan High School, Mapes was signed as an amateur free agent by scout John Angel of the Cleveland Indians in 1940. He broke into organized baseball as a catcher at age 18 with Flint in the Class C Michigan State League. Moved to the outfield, he played with Flint in 1940 and 1941. He hit .244 with 14 homers his first year, then batted .284 with 14 home runs the next. He tied for sixth in the league in homers his first season.

He was very excited to be paid, no matter how little, to do something he loved. During that first season of pro ball he kept after the manager to let him pitch in a game - after all, he had an arm the likes of which few had ever seen. At the end of the season, due to his pestering, he was allowed to start a game. The first three batters hit home runs. When the fourth batter hit a home run, the manager went to the mound and asked, "do you think you can hold the next batter to a single?" Presto the next batter hit a homer. It is believed to still be a record in the minors. Five straight homers to start a ball game. The manager allowed him to finish the first three innings and Mapes never pitched again.

He married Betty Marie Conner on October 1, 1941. He played for Cedar Rapids in the Class B Three-I League (1942), hitting .241, and Wilkes-Barre in the Class A Eastern League (.256) and was with the Cleveland Indians organization when he was drafted into the Navy in April 1944. He played baseball for the San Diego Naval Training Center and when discharged from the service (GB/BN/WK) in 1946, he was with the Seattle Rainiers in the AAA Pacific Coast League (.241) and then back to Wilkes-Barre (1946), hitting .292. He was drafted by the New York Yankees from the Baltimore Orioles in the International League on November 1, 1946 in the 1946 Rule V Draft and spent 1947 with the Kansas City Blues of the AAA American Association. In 1947, his best year in the minors, he had 167 hits, 107 runs, 27 doubles, 11 triples, 21 home runs and 117 RBI at .308 in 155 games. He led the American Association in RBI that year and the Blues finished in first place.

In 1949, in a game against Cleveland, he was playing right field when he caught a long fly ball in front of the 344 foot sign in Yankee Stadium and threw the ball on the fly on the third base bag and got Bobby Avila trying for third base. The next batter hit a fly ball to right; at the crack of the bat, Mapes was on the run, caught the ball with a diving catch only to find the left fielder, Hank Bauer, to his surprise, doing jumping jacks around him and yelling about the throw on the previous play.

The Yankees grabbed a 6-0 lead in Game 4 of the 1949 World Series, thanks to Mapes' two-run double in the fourth inning and Bobby Brown's bases-loaded triple in the fifth inning, and went on to win, 6-4.

On July 5, 1950, in a sloppy game that featured 18 walks, Mapes drove in five runs with a homer and single to pace the Yankees to a 12–8 win over the Philadelphia Athletics. Mapes walked twice in the third inning to tie a major league record. He was also involved in a collision with at second base with Eddie Joost in the seventh inning, in which Joost tore ligaments in his left knee. On August 11 of that same year, Mapes replaced Joe DiMaggio in center field, who was benched for the first time in his career. Cliff met the challenge by hitting a seventh-inning home run to give the Yankees a 7–6 win over the A's. On May 30, 1951 he replaced Mickey Mantle in center field halfway through a doubleheader loss with the Boston Red Sox.

On July 31, 1951, the St. Louis Browns acquired Mapes from the Yankees, sending Bobby Hogue, Kermit Wahl, Tom Upton and Lou Sleater to New York. The trade freed up an outfield spot for Mantle's return as well as Mapes' #7 uniform. Having endured a few of owner Bill Veeck's promotional stunts, he was traded by the Browns on February 14, 1952 with Matt Batts, Dick Littlefield and Ben Taylor to the Detroit Tigers for Gene Bearden, Bob Cain and Dick Kryhoski where he played his final MLB game on September 28, 1952 at age 30. On October 27, 1952 he was traded back to the Browns by the Tigers with Neil Berry and $25,000 in return for Jake Crawford.

Mapes returned to the minors with the Kansas City Blues (.329) and the Toronto Maple Leafs (.220) of the International League in 1953 and the Charleston Senators of the American Association (.240) and the Tulsa Oilers of the Texas League in 1954 (.155), where he lost an eye in his back yard to a lawn dart when he slipped and fell, impaling himself on a horseshoe stake, ending his baseball career at age 32.

In the minors, Mapes pitched, caught and played first base and the outfield. A platoon player with decent power for the Yankees, in 1948 he had to give up his uniform number 3 when it was retired to honor Babe Ruth, then became the first Yankee to wear number 13. Later he wore number 7, now retired in honor of Mickey Mantle. (GDW)

He worked for John Deere and Nipak until the plant closed. He then worked for the state of Oklahoma at the Whitaker State Home, ironically only a county away from Mantle's hometown. He had black hair and gray eyes, his ancestry was Scotch-Irish and his principal hobby was raising homing pigeons. He died at age 74 at home in his sleep in Pryor, OK on December 5, 1996 and is buried at Graham Memorial Cemetery in Pryor. Surviving him was his widow Betty.