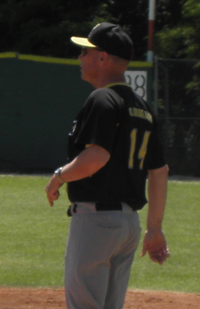 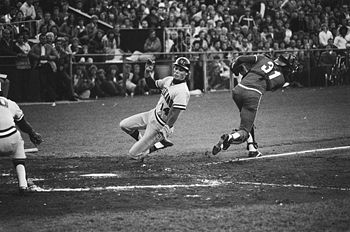 Charles Urbanus Jr. was part of the first family of Dutch baseball. He is the son of Han Urbanus, nephew of Charles Urbanus Sr. (as odd as that may seem), brother of Johan Urbanus and father of Nick Urbanus. He played 131 games for the Dutch national team. Urbanus led the league in several offensive and several pitching categories during his stellar career.

Charles won the 1970 Roel de Mon Award and the 1971 Ron Fraser Award. He debuted in the Hoofdklasse in 1971 with OVVO. In 1973, the teenager starred his father's lifelong club, OVVO Amsterdam, leading Hoofdklasse with 136 strikeouts. He was both the Pitcher of the Year and MVP. He was with the Netherlands when they won the 1973 European Championship. In 1974, he again paced the circuit in batters whiffed (120). He appeared in the 1975 European Championship, when the Netherlands won it all.

Urbanus led the league in strikeouts a third time, with 143 in 1975, and was named Pitcher of the Year. He played for the Netherlands when they finished in the 1977 European Championship. He was named the Best Hitter in the 1978 Haarlem Baseball Week. During the 1978 Amateur World Series, Urbanus hit .308/.341/.462 as the Dutch shortstop; he did not pitch during the tournament.

In 1979, Urbanus led the Hoofdklasse in both hits (59) and batting average (.430). He had his last great season as a pitcher in 1980, going 12-2 with a 1.58 ERA and leading the league in both winning percentage and ERA. He won his third Pitcher of the Year title. He was on the Netherlands when they finished second in the 1979 European Championship. Due to arm problems, Urbanus moved from the mound to the field, where he had obviously shown his talent already. He was in the 1980 Amateur World Series. 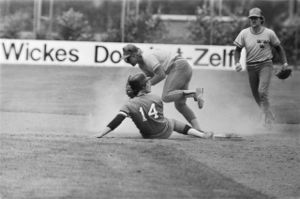 Urbanus won his second batting crown in 1981, at .445. During the 1981 European Championship, he batted .522 as the top hitter in the event (which the Netherlands won). In the 1982 Amateur World Series, he had six hits and two home runs in one win over the rival Italian national team. His 17 hits tied Shih-Chiang Chao and Doug McPhail for the Series lead. He was named the All-Star 2B, joining Eddy Orrizzi, Jae-bak Kim and Hua-Wei Lin on the infield. He was again named the All-Star second baseman in the 1983 Intercontinental Cup as the Netherlands finished fourth, just shy of a Medal. He helped the Netherlands to second place in the 1983 European Championship. Urbanus dominated Italy in the 1985 European Championship as well; in the finals, he had a 4-hit game and 3-hit game against them.

Urbanus led the 1986 Hoofdklasse with 73 hits and was named MVP, 13 years after he first won the award. He concluded his international career in the 1986 Amateur World Series.

Overall, he had 659 hits (65 homers) in 465 games in the Hoofdklasse with a .379 average. As a pitcher, he was 76-36 with 878 strikeouts. He had played in five Amateur World Series and six European Championships. His 131 games for the Dutch national team were a record until broken by Marcel Joost.

After his playing career ended, Charles became a coach. He was named the Dutch Coach of the Year in 1991 with Neptunus; in 1993, he split the award with Jan-Dick Leurs. The team won the 1991 Holland Series and 1993 Holland Series. From 1989-1991, he was unofficially the pitching coach for the national team. He was also a coach with the Netherlands in the 1990 Baseball World Cup and 2000 Olympics. In addition to coaching with Neptunus, he coached for the Amsterdam Pirates (1995-1997).

In 1997, Charles followed his uncle and father into the Dutch Baseball Hall of Fame.

Urbanus had a record of 105-54-4 as a coach through 1997. In 2010, he returned to the head coaching ranks as lead man of the Amsterdam Pirates, replacing former major leaguer Rikkert Faneyte. He guided them to an appearance in the 2010 Holland Series and a win in the 2011 Holland Series; after they lost in the playoffs in 2012, he was replaced by Sidney de Jong for a year, but reclaimed the role for 2014. He led them to the 2016 European Champions Cup title, their first European Cup title ever (they had never even finished second before).

Urbanus was a physical education teacher when not playing baseball.