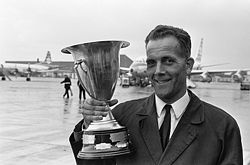 Urbanus debuted in the senior Dutch leagues at age 15 in 1942. He pitched over 150 consecutive complete games in a 8-year period. He went to spring training with the New York Giants in 1952 and 1953, the first Dutch player to come to the US. He only threw a fastball and a self-taught curveball when he first trained with the Giants. While in training with them, he learned a curveball from Sal Maglie and also developed a change-up. In 1952, the extra work showed as he tossed a no-hitter and two one-hitters and averaged 12 strikeouts per game to help OVVO to the Hoofdklasse title. It was one of five titles OVVO won with Urbanus.

The New York Giants offered Urbanus a contract in 1953 but he opted to return to the Netherlands to finish his studies as a CPA (his primary career in terms of finances as baseball in the Netherlands did not pay well) and get married. He would work as an auditor for 35 years.

From 1953-1955, Urbanus was named the Best Pitcher in Hoofdklasse, the first three years the award was given out. He won again in 1957-1958. While Herman Beidschat broke his record for Best Pitcher awards, it would be 50 years until another hurler, Rob Cordemans, also matched Han. He was named MVP in 1954-1955 and again in 1961.

In 1959, Urbanus led Hoofdklasse in batting average (.348), proving himself to be a two-way threat.