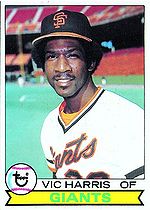 Vic Harris was considered a budding superstar when he reached the major leagues with the Texas Rangers in the middle of the 1972 season, because he had great speed, was considered an excellent defender and someone who would hit for a high average. The athleticism was always there, but he could never hit enough to justify keeping a regular job. In first season, he started by going a record 0-for-35, the worst start to a career by a non-pitcher. For the season he hit just .140 and slugged an even more anemic .177 in 61 games, but he was still given a chance to start full time in center field in 1973. That went slightly better, but in 152 games, he batted .249 with 8 homers and 44 RBIs, so the results weren't great. He did display his speed, with 71 runs, 7 triples and 13 steals.

He had originally been drafted by the Oakland Athletics in the secondary phase of the January 1970 amateur draft, then was traded to the Rangers with Steve Lawson and Marty Martinez for Ted Kubiak and Don Mincher on July 20, 1972, a day before making his major league debut. Following his sole season as a regular, he was traded to the Chicago Cubs alongside Bill Madlock in return for Fergie Jenkins. He began the 1974 season as the Cubs' starting second baseman; however, contrary to Madlock, he could never find his hitting stroke in Wrigley Field, batting just .195 that year and .175 in 1975. His 1974 season eneded early, as he needed knee surgery following a collision with Darrell Evans of the Atlanta Braves on July 7th. After losing the starting second base job, he was never going to displace Manny Trillo, who was a great fielder and a much better hitter. Before the 1976 season, he was traded to the St. Louis Cardinals in return for utility infielder Mick Kelleher. He played 97 games that season, but hit just .228 with a single homer and only one stolen base.

He was traded for the fourth time on October 20, 1976, this time to the San Francisco Giants along with Willie Crawford and John Curtis for Mike Caldwell, John D'Acquisto and Dave Rader. He had his best season as a utility player for the Giants in 1977, hitting .261 in 69 games and scoring 28 runs. He saw time at second base, third base, shortstop, center field and right field that year. However, the bottom fell out in 1978 as he hit just .150 in 53 games. No one considered him a future star anymore at that point and while he managed to sign on as a free agent with the Milwaukee Brewers before the 1979 season, he spent the entire year in the minors with the AAA Vancouver Canadians, batting .275 with 82 runs scored. He came back briefly in 1980, when he hit .213 in 34 games at the end of the season. In his final major league game on October 5th against the Oakland Athletics, he hit a game-ending single off Dave Beard, driving in Ben Oglivie in the bottom of the 15th inning, for the only walk-off ht of his career. Overall, in 579 games over 8 seasons, he batted .217 with 13 homers and 121 RBIs.

In 1981, he signed with the Kintetsu Buffaloes of the Pacific League. He was the everyday second baseman, batting .268 with 22 homers and 74 RBIs - the sort of season that had been expected of him when he was a hotshot rookie a decade earlier. He was only the fourth player in Nippon Pro Baseball history to hit home runs from both sides of the plate in the same game, doing so on July 5th against the Seibu Lions. He moved to the outfield in 1982, hitting .272 with 9 homers and 35 RBIs, but in 1983 he fell to .198. Still, he became the second player in NPB to hit a homer from both sides of the plate twice, doing so on September 1st. He returned to the U.S. in 1984 with the hope of playing in the majors again but he spent the season in AAA with the Louisville Redbirds hitting .231.

After baseball, he settled in Los Angeles, CA working in the aerospace industry with Rockwell and Boeing. He was an instructor at MLB's Urban Youth Academy in Compton, CA from 2006 to 2013.