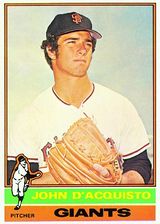 John D'Acquisto pitched 10 seasons in the majors, mostly in the National League. Of his 266 total appearances, 92 were starts.

Gifted with a tremendous fastball but iffy control, he made his major league debut for the San Francisco Giants late in the 1973 season, after having been a first-round pick in the 1970 amateur draft. He had some real success in the minors, going 17-6 for the Fresno Giants in 1972 and 16-12 for the Phoenix Giants the next season, striking out 244 and 245 batters. He went 1-1, 3.58 in his first taste of the majors then had a very good rookie season in 1974. He made 36 starts in 38 games for the Giants, going 12-14 with a 3.77 ERA. He pitched 215 innings, striking out 167 batters - but also walking 127. He was named the National League Rookie of the Year by The Sporting News as well at its NL Rookie Pitcher of the Year, although Bake McBride of the St. Louis Cardinals was the official Rookie of the Year. He was also named Hot Stove League Player of the Year in his native San Diego, CA. However, his control problems - as well as the huge number of pitches he must have thrown as a 22-year-old - caught up with him in 1975. He only pitched 10 times in the majors, going 2-4 with a whopping 10.29 ERA in 28 innings, during which he somehow managed to walk 34 batters (and still strike out 22). In 1976, he walked 102 batters in 106 innings, striking out 53 - and went 3-8, 5.35.

The Giants traded D'Acquisto to the St. Louis Cardinals before the 1977 season, in a large trade that also involved Mike Caldwell and Dave Rader joining the Cardinals, while Willie Crawford, John Curtis and Vic Harris headed to San Francisco. He was only in 3 games for the Cardinals, then was traded again to the San Diego Padres, along with Pat Scanlon, in return for Butch Metzger. He went a combined 1-2, 6.54 in 20 games, again walking over a batter per inning, although this time he had almost as many strikeouts as walks. At that point, the Padres made the decision to move John to the bullpen, and he responded with an excellent season in 1978, when he was 4-3 with a 2.13 ERA and 10 saves in 45 games. He struck out 104 in 93 innings, walking only 56 and giving up a mere 60 hits. It looked like he had found his spot, but the Padres already had an outstanding - and high-priced - closer in Rollie Fingers, so they tried to maximize D'Acquisto's value by giving him more starts in 1979. He made 51 appearances, including 11 starts, pitching 133 2/3 innings with a record of 9-13, 4.92. He struggled anew with his control, striking out 97 while walking 86. He was back in the bullpen full time in 1980, and put up a 3.76 ERA over 39 appearances before being traded to the Montreal Expos on August 11th.

He pitched even better in Montreal, going 0-2, but with 2 saves and a 2.18 ERA in 20 2/3 innings over 11 appearances. A free agent after the season, he cashed in on his success by signing a big contract with the California Angels, who expected that he would be a dominant reliever. All the innings he had pitched as a young man caught up with him as he injured his elbow and was limited to 6 appearances in 1981, during which his ERA was 10.71. In 1982, he was released at the end of spring training, spent most of the year pitching for the AAA Richmond Braves, where he gave up over a run per inning, then was signed by the Oakland Athletics in early August. He came back to the majors at the end of the year, giving up 11 runs in 17 innings in what were his last major league appearances. He pitched briefly for the Denver Bears in 1983, putting up a 9.53 ERA in 6 games before calling it quits.

In 1989, D'Acquisto played for the St. Lucie Legends and Bradenton Explorers of the Senior Professional Baseball Association. He went 4-3 with 5 saves for the teams.

After his retirement, D'Acquisto became a registered investment adviser-banker, but had his license revoked and was sentenced to 63 months in prison over charges of misrepresentation and investment fraud. Later, it was found out through court subpoenas of documents that D'Acquisto was used in a scheme developed by V. Davide Siniscalchi and R. Jeffs Kollar of Sheraton Management, along with others, and was the victim of a set-up. All of the apparent stolen funds purported to have been stolen by D'Acquisto were found in the hands of Siniscalchi of Alliance Holdings and two others, all of whom served time in prison for fraud. D'Acquisto stated that he was not responsible for any purported fraud and his court documents spelled it out clearly.

He was released from federal prison in January of 2002. On June 11, 2004 he was awarded his Doctor of Science degree in Exercise Science and Physiology from then-unaccredited Rochville University, and also attended Cerro Coso Community College.

His name was pronounced "Dee Ah cquisto". He was the first major league player with a last name that started with D and an apostrophe. Despite the fact that this is common in Italian names, through the 2008 season, there had been just three more. He is a cousin of Lou Marone.

"In any five-year period, there are forty guys who are claimed by somebody to be as fast as Walter Johnson, or as fast as Bob Feller, or as fast as Nolan Ryan, as fast as whoever the standard is at the moment. People made the same exact sort of comments about Pete Broberg that they did about David Clyde. We have the same kind of quotes about Gary Gentry, claiming he was as fast as Ryan. The fastest known radar reading from that era, other than Nolan Ryan, was for John D'Acquisto." - The Mighty Fastball By Bill James, The Neyer/James Guide to Pitchers