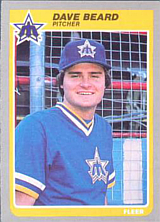 Dave Beard was a big, hard-throwing reliever with a 95 mph+ fastball, sinker, and slider.

After seeing limited action for the Oakland Athletics in 1980, Beard was a September call up the following year for the 1981 Athletics and thrust into a unique situation. Billy Martin, the A's manager, had constructed a pitching staff consisting of five starters who pitched complete games almost every time out, and a bullpen of marginal major leaguers who were used only on rare occasions. By default, Beard was a minor league call up who immediately became the most effective reliever for a team that had already clinched a playoff spot (due to the 1981 split-season). His 3 saves ended up tying for the team lead. He also saved the clinching game of the ALDS against the Kansas City Royals. Beard's experience in the ALCS against the New York Yankees was less positive. With the A's trailing the series 1-0, they jumped out to a 3-1 lead in Game 2. In the 3rd inning, A's starter Steve McCatty surrendered a run and loaded the bases with one out. Uncharacteristically, Martin went with the early hook and brought in Beard. Beard proceeded to give up 5 straight hits, including a three-run homer to Lou Piniella. By the end of the inning it was 8-3, and the A's never led in the series again on their way to being swept.

Beard was considered a possible Rookie of the Year candidate in 1982, but was sent down to Triple A Tacoma after a rough spring. He was recalled at the end of April and ended up having a solid rookie season, recording a 2.77 ERA in relief (his overall ERA was badly skewed by 2 ill-considered starts in which he put up a 10.38 ERA). In 1983, nothing went right for Beard as he struggled with his control and his ERA skyrocketed. At the end of the season, he was traded to the Seattle Mariners, with Bob Kearney, for Bill Caudill and Darrel Akerfelds. Beard had even less success for the Mariners in 1984, surrendering 15 homers in 76 innings. He was released by the Mariners at the end of spring training 1985. Beard became an itinerant for the rest of his career. He signed with the Cleveland Indians to a minor league deal, but was traded to the Chicago Cubs for Tom Grant and saw action as a September call up for the Cubbies in 1985. After being released again at the end of the year, he went on to sign minor league deals with the Atlanta Braves and then the Detroit Tigers. After two years at Detroit's Triple A affiliate, Toledo, he returned to the majors for two final appearances with the Tigers in 1989.