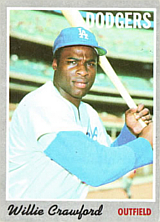 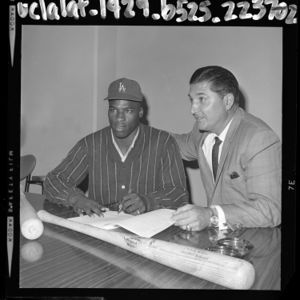 Willie Crawford reached the majors just after his 18th birthday and stuck around for 14 years. He was an above average hitter and underrated outfielder, spending much of his career patrolling the outfield for the Los Angeles Dodgers.

A boyhood teammate of such future stars as Bobby Tolan, Dock Ellis and Bob Watson, Willie signed with the Dodgers for $100,000 almost immediately after his high school graduation. He hit .313 in a 10-game look as an 18-year-old and earned a World Series ring with the 1965 Dodgers, going 1-for-2 against the Minnesota Twins. It took until 1969 for Willie to establish himself as a regular in the Dodger lineup. He routinely platooned in the outfield, alternating with pinch hitter extraordinaire Manny Mota in left field or Joe Ferguson in right field (Ferguson was primarily a catcher but also played right field to get his strong bat into the lineup). Willie hit 11 home runs in 389 at bats in his first close to full-time year, and batted .295/.396/.453 with 78 walks, 14 home runs and 75 runs scored in 1973.

Crawford's last great offering in Dodger blue came in 1974, hitting .295/.376/.432 with 11 homers on a team that won the pennant. Playing part-time in the World Series against the Oakland Athletics, Willie was 2-for-6 with a solo home run against Hall of Fame relief ace Rollie Fingers. He spent one more year in L.A. before being dealt to the St. Louis Cardinals for Ted Sizemore on the eve of the 1976 season. Willie hit .304/.360/.441 in a part-time role for the Cards, then finished his big league career with time served among the Houston Astros and Oakland A's, falling to a .216/.307/.300 line in 101 games in 1977.

Willie's lifetime batting line of .268/.349/.408 may look modest, but since he primarily played in a pitcher's park (Dodger Stadium) during the second dead-ball era, his Adjusted OPS is a very good 115. In fact, he has a higher Adjusted OPS than most of the players deemed similar to him by the similarity scores method. Perhaps the most similar player is Steve Henderson, who has an Adjusted OPS of 113.

Crawford's cousin, Curtis Rowe, played for the Detroit Pistons and Boston Celtics. Willie died of kidney disease at his home in Los Angeles, aged 57, in 2004.