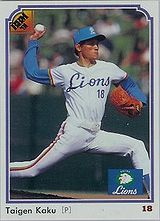 In 1991 Kaku was named Pacific League MVP after he went 15-6 with a 2.94 ERA and led the league with 4 shutouts. He finished third in the league in ERA, was named to the Best Nine for the only time and won a Gold Glove. He won another Gold Glove in '92 and was 14-4 with a 2.41 ERA. His three consecutive shutouts in August and September that year set a PL record. He again finished third in the league in ERA. In '95, Kaku made his second All-Star team and posted a 2.54 ERA.

Kaku became the first foreign player to lose "gaijin" status when determining roster limits (NPB limits the number of foreign players - those with 10 or more years in NPB are no longer counted as gaijin). It would be a decade before Tuffy Rhodes became the second such qualifier.

Kaku was known for his fastball (once timed at 97 mph, the fastest in Asia at the time) and slider. Orestes Destrade described him as having the best stuff on the dynastic Lions: "he was just nasty." (Quote from "Remembering Japanese Baseball" by Rob Fitts)