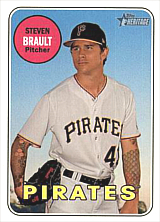 Steven Brault made his big league debut in 2016. He is the first major leaguer to hail from Regis University.

Brault was a pitcher-outfielder in college. He was third-team All-American by the National Collegiate Baseball Writers Association in 2013 and the first All-Rocky Mountain Athletic Conference first team pick at two positions (he hit .397). The Baltimore Orioles took him in the 11th round of the 2013 amateur draft. A vocal performance major, he played the role of Joe Hardy in Damn Yankees in high school and had been offered an internship with an opera company in Colorado. He continued being a singer in the offseasons after his baseball career began, performing with the band Street Gypsies. He had previously sang for the group Off The Water.

In his pro debut, Steven played for the Aberdeen IronBirds, going 1-2 with a 2.09 ERA. Had he qualified, he would have tied for 6th in the New York-Penn League in ERA. He had a sharp 2014 between the Delmarva Shorebirds (9-8, 3.05) and Frederick Keys (2-0, 0.55), tying Sebastian Vader for second in the Orioles chain in wins (3 behind Tyler Wilson) and finishing 4th with 124 strikeouts (between Parker Bridwell and Zach Davies). He finished 5th in the South Atlantic League in ERA (between John Gant and Antonio Senzatela), first in WHIP (1.04), tied Luis Ysla for 5th in strikeouts (115) and was second in lowest opponent average (.227). That offseason, he was sent to the Pittsburgh Pirates as the player to be named later in a deal with fellow minor league pitcher Stephen Tarpley for outfielder Travis Snider.

Brault split 2015 between the Bradenton Marauders (4-1, 3.02 in 13 games) and Altoona Curve (9-3, 2.00). He tied Angel Chavez for second in the Pirates chain in wins behind Austin Coley's 16. His 125 strikeouts were second in the Bucs chain, 11 behind top prospect Tyler Glasnow, and he was 5th in ERA. He was 8-0 with a 0.96 ERA in his last 10 starts, the lowest ERA in AA in that span and the most wins in the Eastern League for that period. He allowed six earned runs in 4 2/3 innings in his lone playoff start, losing to the Bowie BaySox. Getting to bat for the first time since college, he was 7 for 16 with 3 runs scored and 2 RBI. Despite only being with Altoona half the year, he tied Wardell Starling's 9-year-old team record for hits by a pitcher. He had the lowest ERA by a Curve pitcher with 75+ innings since Shane Youman, also 9 years prior. For 2014 to 2015, his 2.59 ERA was second-lowest among all minor league pitchers with 300+ innings; only Tyler Wagner's 2.05 was better. In the fall, he pitched for the Glendale Desert Dogs, with a 4.91 ERA in five games, fanning 16 in 14 2/3 innings. He opened 2016 with the Indianapolis Indians, was sidelined with a sprained left hamstring and served a rehab stint with the West Virginia Black Bears (a hit, 5 strikeouts in 4 scoreless innings). He was 2-3 with a 2.57 ERA in 8 games for the Indians, fanning 44 in 35 innings, when he was called up to the Pirates to replace Jameson Taillon, who went on the disabled list. He was the 4th member of the Indianapolis rotation to get the call for their MLB debut, following Wilfredo Boscan, Taillon and Chad Kuhl.

In his debut, July 5th, he gave up two runs (one earned) in 4 innings against the St. Louis Cardinals and ended up with a no decision; Matt Joyce pinch-hit for him and Juan Nicasio relieved him with a 2-2 tie. He also had a hit in his only at-bat, facing Mike Leake. He was only up for a day as Glasnow took his spot, becoming the 5th member of the 2016 Indianapolis rotation to make his MLB debut that summer. Brault saw action in 8 games in 2016 and 11 games in 2017 with mostly middling results. He was reported to be the first Pirate to sing the National Anthem before a game when he did so in 2018, though Mudcat Grant had done so decades prior. In 45 games (5 starts), he posted a 4.61 ERA and a 57/82 BB/K ratio in 91 2/3 innings. He had the most plate appearances by a pitcher without striking out (35) to begin a career since Fred Hutchinson in 1939-1940. He made more starts in 2019, 19 to be precise (out of 25 appearances). He reached the 100 strikeout mark on the nose but posted a 5.16 ERA in 113 1/3 innings, still one of the best marks on a terrible Pirate staff. He hit his first home run on September 1st but might have drawn as much notice for throwing 69 straight fastballs to start the game, mixing two-seamers and four-seamers. In the thin air of Denver, he knew breaking balls would not work as well (having gone to college in the area) and he had been relying a lot more on fastballs in recent starts. It was not until his 70th pitch, to Ian Desmond, that he went to a slider. While he hit .333/.349/.429, he did not win the Silver Slugger Award, which went to Zack Greinke.

He was a special guest vocalist with the Pittsburgh Symphony Orchestra in 2020. With games on hold due to the COVID-19 pandemic, he released his first album, A Pitch of Broadway, in which he covers 12 Broadway songs.