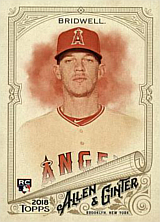 Starting pitcher Parker Bridwell was a surprise 10 game winner in 2017.

Parker was drafted by the Baltimore Orioles in the 9th round of the 2010 amateur draft, one pick after pitcher Brandon Cumpton and ahead of future All-Star and Cy Young Award winner Jacob DeGrom. Scouted by Ernest Jacobs, he signed for a $625,000 bonus and began his career at 18 with a 1.59 ERA in 5 2/3 innings his first campaign, but soon struggled. From 2011 to 2013, his ERAs were 5.26, 5.98 and 4.73, respectively, and his record was 15-26. Though he was not a strikeout pitcher to begin his career, he averaged over a strikeout per inning the latter two years of that run.

He made his major league debut with the Orioles in 2016, pitching 3 1/3 innings over two relief appearances with an ERA of 13.50. In April 2017, he was sent to the Los Angeles Angels for future considerations, which turned out to be a very good thing for him, as the Angels soon needed starting pitching. He started his first game on May 30th, defeating the Atlanta Braves, 9-3, to earn his first big league win. It was a one-off outing, but he impressed enough to warrant a second look, and starting on June 14th he was inserted as a regular member of the rotation. On July 5th, he had a particularly strong game, giving up no runs to the Minnesota Twins over 6 innings to earn a 2-1 win, improving his record to 3-1, 3.25. Capping his rookie season with 7 scoreless innings of 3-hit baseball and a W against the Seattle Mariners on October 1, Parker finished with a 10-3, 3.64 mark. He was not missing many bats, striking out only 73 in 121 innings while allowing 19 home runs, but he was limiting damage effectively enough to keep the Angels in ball games.

Right elbow inflammation killed any hope of a repeat performance in 2018, as he finished the season tossing only 6 2/3 big league innings with a victory and a ghastly 17.55 ERA. At season's end, the Angels designated him for assignment. Between November 20, 2018, and January 22, 2019, Parker was property of the Angels, the New York Yankees, the Angels again and finally the Oakland A's before being outrighted to Triple A on January 25 by Oakland. At the beginning of April, he was released and signed a minor league deal to return to the Angels. In 22 games (12 starts), Parker was 6-6, 8.12 in the hitter's haven of the Pacific Coast League and became a free agent at season's end.

He is the second major leaguer named Bridwell, after Al Bridwell who played a century earlier.