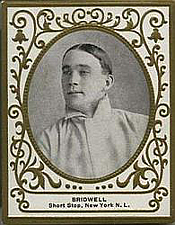 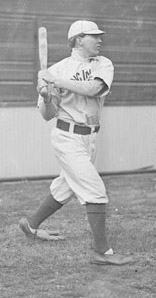 “Bridwell is not fluking. He is pulling the same fast stuff every day, making quick pick-ups and throws from awkward positions and getting his share of bingles. Few of his hits travel for extra bases, but any of the opposing pitchers will tell you that Bridwell in a pinch is one of the most dangerous men in the National League at bat.” - Chicago Day Book, 1913

"For Fred's sake, I wish it had never happened; it caused him so much grief. Let me amend what I said a minute ago: there's one thing that happened in baseball I would change if I could do it all over again. I wish I'd never gotten that hit that set off the whole Merkle incident. I wish I'd struck out instead. If I'd done that, then it would have spared Fred a lot of unfair humiliation. Yes, I wish I'd struck out. It would have been better all around." - Al Bridwell, to Lawrence Ritter, The Glory of Their Times

Infielder Al Bridwell is best remembered as a central figure of one of baseball's most lasting controversies. On September 23, 1908, with two outs in the 9th, he dug in for the New York Giants against Jack Pfiester of the Giants' bitterest rivals, the Chicago Cubs, and laced a clean single that set in motion the events by which Fred Merkle became known for one of history's largest "Boners". Naturally, with a catastrophe so cataclysmic, the season came down to a tie between the Cubs and the Giants in the standings, with the Cubs pressing forward and winning their last World Series for 108 years.

Bridwell was a colorful sort on and off the diamond. A former boxer, he once slugged McGraw and left the Hall of Famer sprawled on his ass in the dugout. He also launched a bat at Hall of Fame umpire Hank O'Day during a frank disagreement in a game, but did not make it two for two in laying out future Cooperstown enshrinees. Fred Snodgrass recalled (in The Glory of Their Times) Bridwell's skill with firearms during spring training one year; Al putting a bullet right through a pocket watch that pitcher Bugs Raymond had tossed in the air.

Al lived into the 1960s, when he was one of the few players in Ritter's book to put over the modern ballplayers, particularly Willie Mays. He died at 85 in Portsmouth, OH.

Sources for this article include: The Glory of Their Times by Lawrence Ritter