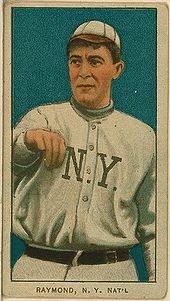 Pitcher Bugs Raymond won 18 games for the New York Giants in 1909, but his struggles with alcohol caused difficulties with manager John McGraw. Not that McGraw should have been surprised, as Raymond already had a reputation as a problem drinker when he swung a trade to acquire him from the St. Louis Cardinals in return for C Roger Bresnahan before that season; McGraw thought he could keep the drinking under control and still benefit from Raymond's pitching talent, but it turned out not to work in the longer term. After leaving the majors, he played for the Chicago club in the United States League in 1912.

Raymond died at age 30, several weeks after being assaulted by an angry fan. During a semi-pro game, Fred Cigranz of Chicago ran out on to the field and kicked and beat Raymond with a bat. He was hospitalized for a time, then released, but died on September 7 in a hotel after complaining of a severe headache.