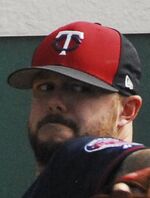 Ryan Pressly made his major league debut in 2013.

The Minnesota Twins took him with the fourth pick of the 2012 Rule V Draft, following fellow hurlers Josh Fields, Hector Rondon and Daniel Rosenbaum. He made the team out of spring training and had his first major league appearance with the Twins on April 4, 2013, facing the Detroit Tigers. He pitched the 9th inning as his team's seventh hurler of the game, giving up a single to the first batter he faced, Omar Infante, but then retiring the next three, including Torii Hunter on strikes, to complete a 9-2 win.

Pressly recorded a win in back-to-back relief appearances against the Toronto Blue Jays on May 30-31, 2015. Both were one-run wins as the Twins were surprisingly hanging on to first place in the AL Central. He went 3-2, 2.93 in 27 appearances that in season, then in 2016 was 6-7, 3.70 with his first major league save in 72 appearances for the last-place Twins. His ERA rose for the fourth straight season in 2017, when he was 2-3, 4.70 in 57 games, but the Twins bounced back to a winning record and a spot in the Wild Card Game. He struck out 61 batters in 61 1/3 innings, but was not used in the game, which the Twins lost to the New York Yankees. In 2018 he improved to 1-1, 3.40 over his first 51 outings. He had 69 strikeouts in just 47 2/3 innings and with the team virtually out of postseason contention by the trading deadline, was sent on July 27th to the Houston Astros in return for two minor leaguers, Jorge Alcala and Gilberto Celestino. He was outstanding for Houston, putting up an ERA of 0.77 in 26 games. In 2019, he set a major league record when he made his 39th consecutive scoreless outing, dating back to the previous year, on May 17th. He surpassed Craig Kimbrel, who had made 38 consecutive appearances without giving up a run for the 2011 Atlanta Braves. He extended the streak by one more game, to 40 before finally surrendering a run on May 24th - the only run he surrendered over 24 outings in the first two months of the season. He finished the year at 2-3, 2.32 with 3 saves and was named to the All-Star team for the first time that season.

On June 25, 2022, he earned his 15th save of the season when he pitched the final inning of a 3-0 win against the New York Yankees, completing a combined no-hitter that was started by Cristian Javier, who pitched the first 7 innings, and continued by his usual set-up man, Héctor Neris, who handled the 8th. Ryan retired the three batters he faced in order to complete the feat. He finished the year at 3-3, 2.98 in 50 games, with a career-high 33 saves. In 48 133 innings, he compiled 65 strikeouts while walking only 13 batters. He was outstanding in the postseason, picking up a total of four saves as the Astros breezed through the Division Series and ALCS, sweeping the Seattle Mariners and the Yankees in order. In Game 4 of the World Series against the Philadelphia Phillies on November 2nd, he was once again called on to pitch the bottom of the 9th with a no-hitter on the line. Once again, Javier had been outstanding as the starting pitcher, tossing off six hitless innings, and Bryan Abreu and Rafael Montero had followed with a perfect inning each. He completed the momentous feat by striking out Brandon Marsh to start the inning, then after Kyle Schwarber had worked a walk to become the Phils' first baserunner since the 3rd inning, he got Rhys Hoskins to fly out to right and J.T. Realmuto to ground out to third to end the game, a 5-0 win that evened the series at two wins apiece. It was only the second no-hitter in World Series history, after Don Larsen's perfect game in the 1956 World Series, and the third postseason no-hitter overall. By completing both no-hitter, he became the first pitcher - along with Javier - to be part of two combined no-hitters, and both had come in the same season.