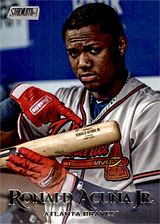 Outfielder Ronald Acuña was the winner of the the 2018 National League Rookie of the Year award. He was named the winner of the 2017 USA Today Minor League Player of the Year Award and the Baseball America Minor League Player of the Year Award. The son of minor league player Ron Acuña, he was signed by the Atlanta Braves before the 2015 season as a 17-year-old by scout Rolando Petit, who had first spotted him before he had turned 15. His younger brother, Luisangel Acuña, is also considered a top prospect who was signed to a large bonus by the Texas Rangers during the summer 2018 international signing period.

He made his debut splitting his first season between the GCL Braves and Danville Braves, hitting a combined .269/.380/.438 in 55 games. In 2016, he played two games in the Gulf Coast League and 40 with the Rome Braves of the South Atlantic League, his season being shortened by an injury. When he did play, he continued to shine, with a batting line of .312/.392/.429. In 2017, he played at three levels, starting in Class A with the Florida Fire Frogs of the Florida State League, where he hit .287 in 28 games. Promoted to the AA Mississippi Braves, he hit .326 in 57 games, then finished the year in AAA with the Gwinnett Braves after being promoted on July 13th. With Gwinnett, he hit a home run in his second at-bat and finished at .344 in 54 games, his batting average having improved at every level. Overall, in 139 games, his batting line was .325/.374/.522, with 13 doubles, 8 triples and 21 home runs. He scored 88 runs and drove in 82 while stealing 44 bases. He was named to play in the 2017 Futures Game, then after the season was distinguished by USA Today and Baseball America as the minor league player of the year. He was also named #2 on the top 100 prospects list compiled by mlb.com in February 2018. The only player, ahead of him, Shohei Ohtani, was not really a true prospect, having already played a number of seasons in Nippon Pro Baseball, so it could be argued that Acuna was in fact #1.

To say there was a lot of hype around Acuña when he joined the Braves for spring training in 2018 would be a major understatement. Between fans clamoring he be given a starting outfield spot immediately, reporters who were saying he was the chosen one who would turn around the team's fortunes, and observers who made comparisons to all-time greats like Hank Aaron or contemporary superstars like Mike Trout, it was a lot for a 20-year-old to digest. But he seemed unfazed, as he went on a 14-for-25 tear in Grapefruit League games, making it hard for the Braves to send him down, even though from a business point of view, it was in the Braves' interest to delay his debut by at least a few weeks to push back his eligibility for salary arbitration. They did decide to put finances ahead of immediate on-field results, sending Acuna down to the minors on March 19th. He started off slowly in AAA, hitting .232 with 1 homer and 2 RBI in 17 games for the renamed Gwinnett Stripers. As expected, shortly after the period to delay his arbitration by a year had passed in late April, he was called up and was expected to start regularly from that point forward. With 21-year-old Ozzie Albies already on the team, the Braves now had the two youngest players in the major leagues on their roster.

In his major league debut on April 25, 2018, Acuña went 1 for 5 starting in left field against the Cincinnati Reds. His first hit was a single in the 8th inning, and he later came around to score the winning run in a 5-4 victory. He wore uniform number 13 in tribute to fellow Venezuelans Dave Concepción, Ozzie Guillén and Omar Vizquel. On April 26th, his second game, he hit his first career homer, a tape-measure blast off Homer Bailey that traveled 416 feet into the second deck at Great American Ballpark. He added an RBI double in the 8th and scored another run as the Braves prevailed again, 7-4. On May 8th, his long home run off Blake Snell of the Tampa Bay Rays was the only run in a 1-0 Braves win; he became the youngest player to hit a home run in a 1-0 game since September 25, 1935, when 19-year-old Phil Cavarretta had done so. On May 28th, he stumbled while running down the first base line in a game against the Boston Red Sox and was taken out of the game with an apparent knee injury. The Braves initially feared the worst, but an MRI only detected a mild sprain, and while Acuña was placed on the disabled list, his stay was expected to be short.

He missed a full month, returning to the Braves on June 29th. On August 13th, he accomplished a very rare feat by leading off both games of a doubleheader against the Miami Marlins with a home run. He started off the bottom of the 1st in game one with a blast off Pablo López as Atlanta went on to win handily, 9-1, then in the second game, hit one off Merandy González, making his first big league start, as Atlanta prevailed again, 6-1. He was just the fourth player to do this, following Hall of Famers Harry Hooper and Rickey Henderson (in 1913 and 1993, respectively), and Brady Anderson, who had been the most recent player to do so on August 21, 1999. The following day, he also led off the game with a homer and became the youngest player in history to hit homers in five consecutive games. For good measure, he added another long ball in the 8th in a 10-6 Braves win over the Marlins. On August 15th, Marlins starter José Ureña decided to take the law into his own hands and plunked him on the elbow with his first pitch of the game, a 97 mph fastball. The benches cleared and Ureña was immediately ejected, as was Braves manager Brian Snitker. Acuña had to leave the game in the 2nd inning with a bad bruise but escaped serious damage, while commentators were outraged at the pitcher's stupid behavior - with one notable exception being Keith Hernandez (who claimed it was normal to go after such a hot hitter). He did not miss any additional time and ironically, the hit by pitch was part of a streak of 9 consecutive games in which he reached base as the game's leadoff hitter. He was named the NL Rookie of the Month for August on the strength of a .336 average, 11 homers and 21 RBI. He finished the season at .,293 in 111 games, with 26 homers, 76 runs scored and 64 RBI as the Braves won the National League East. When he connected for a grand slam off Walker Buehler of the Los Angeles Dodgers in Game 3 of the NLDS on October 7th, he became the youngest player in postseason history to do so, displacing Mickey Mantle.

As a further honor stemming from his outstanding rookie season, he was selected to be card #1 of the 2019 Topps baseball card set. On April 2, 2019, he signed a contract extension with the Braves, covering 8 years and guaranteeing him $100 million. On June 10th, he hit his first career regular season slam, off Alex McRae of the Pittsburgh Pirates, in the 2nd inning of a 13-7 win. He made the All-Star team for the first time that year and was a regular feature on highlight shows for his spectacular outfield catches, routinely robbing opposite batters of homers or extra-base hits. On August 18th, manager Brian Snitker removed him from a game for lack of hustle: he had stood at home plate to watch one of his drives, which he thought was headed for the seats, only to have it hit off the wall as he had to settle for a single. To make things worse, he was then caught stealing, at which point Snitker replaced him by Adam Duvall to teach him a lesson about focus. On August 23rd, he became the second youngest member of the 30-30 club, trailing only Mike Trout, when recorded his 30th stolen base in a game against the New York Mets. He had already hit 36 homers by this point, and his stolen base total was leading the National League. On September 19th, he hit his 40th homer; he just needed 3 stolen bases to join the extremely exclusive 40-40 club, but he did not steal another base, finishing with 41 homers and 37 steals. In addition to stolen bases, he led the league in runs scored with 127 and plate appearances with 71. He won a Silver Slugger Award and finished 5th in the MVP voting.

On September 4, 2020, he hit the 17th leadoff homer of his career, tying the Braves franchise record set by Felipe Alou from 1964 to 1969. On September 25th, he hit a blast measured at 495 feet at Truist Park against Chris Mazza of the Boston Red Sox, the longest hit in the majors that season. Overall, he batted .250 in 46 games with 11 doubles and 14 homers, scoring 46 runs and driving in 29. His OPS+ was 152 and he again won a Silver Slugger Award. He continued his good work in the postseason, as the Braves made it to within one win of the World Series. He played all 12 games, scored 10 runs on 10 hits, with 4 doubles and a homer. At the start of the 2021 season, he flashed some of his outstanding speed: on April 11th, he led off a game against the Philadelphia Phillies by scratching an infield hit on a perfectly routine grounder to shortstop, then the next day, he tripled and then scored on a shallow fly ball just behind second base. He got off to a great start, being named the National League Player of the Month for April after hitting .341 with 8 homers, 18 RBIs and 25 runs scored in 24 games. On May 19th, he hit the first walk-off homer of his career, a solo shot off Jacob Barnes of the New York Mets that broke a 4-4 tie in the bottom of the 9th. On June 20th, he hit his 100th career homer, off Kwang Hyun Kim of the St. Louis Cardinals, the only run in a 1-0 Braves victory. The homer came in his 378th game; he was 6th fastest to reach the mark, and was also the fastest to reach that total and collect 75 stolen bases as well. He was also in the all-time top ten of youngest players to hit their 100th homer. On July 10th however, his season ended abruptly when he tore his right ACL on an attempted catch of a ball hit by Jazz Chisholm of the Miami Marlins in the 5th inning; he failed to catch the ball, which went for an inside-the-park homer. He was able to get up and walk a few steps, but was in obvious pain and had to be carted the rest of the way off the field. Tests after the game revealed the extent of the injury, and he had to undergo season-ending surgery. In 82 games, he had hit .283 with 24 homers and 52 RBIs, and was leading the National League with 74 runs scored. He had been elected a starter in the All-Star Game.

As a sign that Acuña's popularity was reaching beyond the habitual baseball circles, in June 2021 Atlanta-based alt-folk singer-songwriter Faye Webster released a singled entitled "A Dream About a Baseball Player", all about her impossible crush for the Braves' slugger.