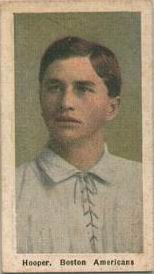 Harry Bartholomew Hooper (August 24, 1887 – December 18, 1974) was an outfielder in the early 20th century. Hooper batted left-handed and threw right-handed. He still holds many team records with the Boston Red Sox.

Hooper was born in Bell Station, CA. A graduate in engineering at Saint Mary's College of California, he broke into the majors with the Red Sox in 1909. He was traded to the Chicago White Sox in the 1921 season and finished his career in 1925.

Hooper was known as a top-calibre defensive right fielder and a solid leadoff hitter. Between 1910 and 1915, he teamed with Tris Speaker (CF) and Duffy Lewis (LF) to form one of the finest outfield trios in baseball history.

Over his career, Hooper scored 100 runs or higher three times; batted .300 or higher five times, and stole 20 or more bases nine times. He also finished in the top ten list in triples seven times and in home runs three times.

On May 30, 1913 Hooper became the first player to hit a home run to leadoff both games of a doubleheader, a mark only matched by Rickey Henderson 80 years later. Beside this, Hooper is the only person to be a part of four Red Sox World Series championships: in 1912, 1915, 1916 and 1918. On October 13, 1915, he became the second player to hit two home runs in a single World Series game. Hooper was also the captain of the Red Sox in 1919.

Hooper was a player-manager for one season in the minors with the San Francisco Missions of the Pacific Coast League in 1927. He batted .282 in 81 games and led the team to a 86-110 record. He was also the baseball coach at Princeton University in 1931-1932, but his salary was cut back because of the Great Depression, and Hooper returned to California, where he was active in the real estate business. Harry Hooper was selected to the Hall of Fame in 1971. He died in Santa Cruz, CA, at age of 87.

Harry's son John Hooper played in the minor leagues and later became a baseball researcher who was instrumental in the campaign to have his father enshrined in Cooperstown.

"The best outfield trio I ever saw? That's easy. (Tris) Speaker, (Duffy) Lewis and Hooper - and the greatest of those was Hooper." Bill Carrigan, former Red Sox manager.

Some or all content from this article is licensed under the GNU Free Documentation License. It uses material from the Wikipedia article "Harry Hooper".