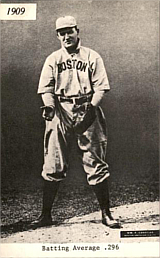 “You might as well try to move a stone wall.” - Nixey Callahan, on Carrigan's plate blocking skills

Bill Carrigan was a catcher for 10 years in the major leagues, and also managed for 7 seasons, all with the Boston Red Sox. He was a member of the championship-winning 1912 team and was player-manager of the 1915 and 1916 teams that also won the World Series. He is one of the few catchers to catch three no-hitters in the majors and was a posthumous inductee to the Boston Red Sox Hall of Fame in 2004.

He retired from the grind to his hometown of Lewiston, ME after the 1916 World Series and started a chain of movie theaters around New England, which he eventually sold for a tidy profit; at the time, he had just married, his first child had just been born and he considered that a life in baseball was incompatible with raising a family. He was convinced to return to the dugout in 1927, but the team was no longer competitive and the style of play had changed considerably from the time of his heyday. He stayed for three seasons and then retired for good. Carrigan later coached at Bates College in 1933-1934 and had a successful career in banking following that second retirement.