Jake Stahl was a first baseman in the early days of the American League who led the Boston Red Sox to their second World Championship as manager in 1912.

Jake Stahl, who was no relation to contemporary outfielder and manager Chick Stahl, attended the University of Illinois where he played both football and baseball under coach George Huff, who would later serve briefly as manager of the Red Sox. He was the team's catcher at the time and hit .441 as a sophomore in 1900. He was also an excellent student and graduated in 1903 with a law degree. At that point, he joined the Boston Americans as a third-string catcher, batting .239 in 40 games behind starter Lou Criger and back-up Duke Farrell. The Americans won the first World Series that year, but Stahl did not get to play in any of the post-season games.

The following winter, Jake Stahl was traded to the Washington Senators where he was converted into a first baseman. He hit .262 with 3 home runs and 50 RBI, yet those modest numbers were all team highs as the 1904 Senators played to a woeful 38-113 record. Manager Patsy Donovan, who had been Stahl's teammate in Boston, was fired after the season, and Stahl was promoted to take his place, becoming the youngest player-manager in American League history. The team showed marked improvement under Stahl's leadership in 1905, posting a 64-87 record and climbing out of the cellar. Stahl was again the team's best offensive player in spite of a .250 batting average, leading the Senators with 125 hits, 12 triples, 5 home runs, 66 RBI and 41 stolen bases. Another sign that Stahl was not the typical ballplayer of the era is that he married one Jennie Mahan after the season, the daughter of a wealthy businessman.

Things went sour in 1906, however, as the team was shaken by the early-season death of shortstop Joe Cassidy, who fell victim to typhus, and stumbled to a 55-95 record. Stahl's batting average slipped to .222 and he was replaced as manager after the season. He wanted to return to Boston, but was traded to the Chicago White Sox instead and refused to report to his new team. He thus missed the entire 1907 season.

Stahl spent the 1907 season as the head coach at the Indiana University.

The White Sox traded the disgruntled Stahl to the New York Highlanders before the 1908 season. New York already had the slick-fielding Hal Chase to man first base, so Stahl moved to the outfield. In July, his contract was sold to Boston, where he returned to his familiar position. Over the next three seasons, he was one of the team's offensive pillars. He was the runner on first base on July 19, 1909 when Amby McConnell hit into the first unassisted triple play in baseball history; Neal Ball was the fielder for the Cleveland Naps. Stahl led the American League in home runs with 10 in 1910, and was fourth in RBI with 77 and triples with 16. However, he announced his retirement after the season in order to work in a bank owned by his father-in-law, missing the entire 1911 season. 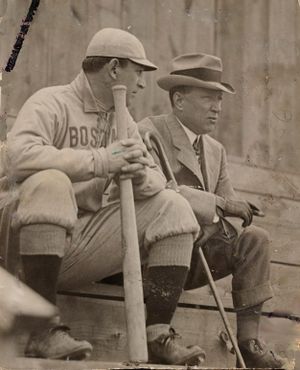 Henry Weston Mahan purchased the Boston Red Sox in early 1912 and convinced his son-in-law to come out of retirement to play and manage the team. Ironically, it was once again Patsy Donovan who ceded his place to Stahl. And once again, Stahl was able to turn his team's fortunes around. The Red Sox had sputtered since winning two consecutive pennants in 1903 and 1904, finishing 5th in 1911 in spite of a talent-laden line-up. Stahl was able to focus the team towards success, leading it to its best record ever in 1912 with 105 wins against 47 losses, running away with the pennant and then defeating the New York Giants in the World Series. Stahl did his part on the field as well, batting .301 for the year.

In 1913, Jake Stahl suffered a broken foot which kept him off the playing field, while he continued to manage. Team President Jimmy McAleer, who was apparently afraid that Stahl was about to replace him, blamed him for the team's poor performance. He demanded that he return to the line-up. The friction between the two divided the Red Sox into two rival factions, one aligned with Stahl composed of Tris Speaker, Joe Wood and Larry Gardner, and one supporting McAleer whose leaders were Bill Carrigan, Duffy Lewis and Heinie Wagner. After a heated confrontation between McAleer and Stahl while the team was on the road in Chicago in July, McAleer demanded his manager's resignation, and replaced him with Carrigan. In October, Stahl announced his retirement.

In 1914, Jake Stahl returned to banking, becoming vice-president of the Washington Park National Bank in Chicago, which was owned by his father-in-law. In 1917, he joined the military after the USA entered World War I and served as a Second Lieutenant in the Army Air Bombing Division. When he was discharged in 1919, he took over the presidency of the bank, which became quite successful over the next three years. However, Stahl over-extended himself in his position, and suffered a nervous breakdown in 1920. He then contracted tuberculosis, and died in a sanatorium in Monrovia, California in 1922 at the age of 43.