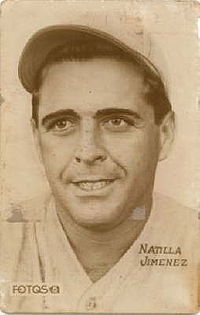 Natilla Jiménez was a Cuban amateur star who had some success in the professional ranks, winning a minor league ERA title and leading Cuba's winter league in wins once.

Jiménez was initially discovered by Joaquín Viego. He had a 1.70 ERA for the Hershey Sports Club to lead Cuba's top amateur circuit in 1937. He also pitched briefly for the 1937 New York Cubans, allowing four hits and three runs while retiring only one batter. On September 23, 1938, he tossed a no-hitter for Hershey as part of a 15-1 campaign, leading the league in record. He again had the best record in 1939 (11-1). In the 1938 Central American and Caribbean Games, he made his Cuban national team debut, going 1-0 and hitting a mammoth home run as well. Cuba won the Gold Medal, with Agapito Mayor getting their other four wins.

In his final tournament as an amateur, the right-hander went 1-1 with a 0.00 ERA in the 1943 Amateur World Series while going 3 for 15 at the dish. He was named MVP as Cuba won it all. Surprisingly, the MVP was the only member of the Cuban staff who would not appear in the majors as his moundmates were Izzy León, Rogelio Martinez, Sandy Consuegra and Julio Moreno. 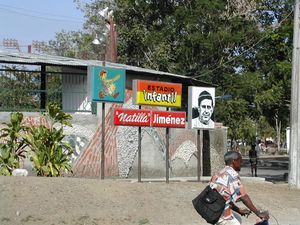 Two factors would combine to cost Natilla of a shot at the big leagues: the return of many players from World War II and the lure of big money from Jorge Pasquel and his brother, feeding a flurry of players (such as Maglie, Max Lanier and numerous Cuban and Negro League stars) traveling to the Mexican League for the 1946 campaign. Those players would later be blacklisted by Organized Baseball. He went 14-15 with a 3.40 ERA and 15 complete games for the Industriales de Monterrey. He was 6-3 for Habana that winter. With Monterrey in 1947, Jiménez fell to 5-7, 4.50. He ended his pro career after just five years by going 2-4 for the Leones of the Cuban Players League.

The Jaruco native was a key bridge between the pre-Castro era of Cuban baseball and the Castro era. He was one of the first four managers in the new Cuban Serie Nacional, being the initial skipper for the Orientales. He went 130-125 in five seasons guiding the Orientales and Las Villas. He also coached in both the Cuban leagues and for the Cuban national team.

This biographical article is missing the person's: birth date
Retrieved from "https://www.baseball-reference.com/bpv/index.php?title=Natilla_Jiménez&oldid=756971"
Categories: