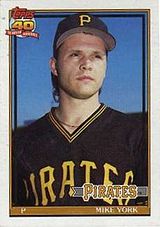 York was signed by the New York Yankees and scout Joe Begani as the 40th round pick of the 1982 amateur draft. He debuted professionally in 1983 with the Oneonta Yankees, allowing 19 hits, 8 walks, 3 wild pitches and 2 hit batters in 11 innings out of the bullpen.

The White Sox also gave up on Mike and released him. He was signed by the Detroit Tigers. Pitching for the Bristol Tigers, he went 9-2 with two saves and a 2.37 ERA in 21 games. He allowed 24 hits in 38 IP but also walked 34. York tied Kerry Griffith for the Appalachian League lead in wins while helping Bristol to the title. Had he qualified, he would have been second in the Appy League in ERA.

York was signed by the Pittsburgh Pirates in November of 1986 and began receiving help from Sam McDowell, the Pirates' drug and alcohol counselor at the time. York credited it with turning around his life and career as drinking had negatively affected his career to that point.

"I'll always be grateful to this organization, no matter if I'm here one more day or the next 20 years. They gave me a chance for a new start, not just in baseball, but in life." Mike York to The Pittsburgh Post-Gazette

For the 1987 Macon Pirates, York had a 17-6 record in moving to the starting rotation. He had a 3.04 ERA and struck out 169 in 166 IP while allowing only 129 hits. Control remained a problem, as he led the South Atlantic League with 88 walks. On the other hand, he also led the league in wins and was second in strikeouts behind Curt Schilling's 189. On July 5, he shut out the Savannah Cardinals on one hit and 10 strikeouts. Baseball America rated him the #7 prospect in the league, ahead of the likes of Juan Gonzalez and Pat Hentgen. They rated him the league's #2 pitching prospect, behind Doug Linton.

York remained strong entering 1988, as he began with a 9-2, 2.68 record for the Salem Buccaneers; had he qualified, he would have tied Kent Mercker for the Carolina League lead in ERA. Instead, he was promoted to the Harrisburg Senators, where he struggled, with a 0-5, 3.72 mark.

York then lost his first four games in 1989 to begin his AA career 0-9. He righted the ship and won 11 of his final 12 decisions that year while his ERA wound up at 2.31. He only walked 40 in 121 innings while striking out 106, showing significant improvements in terms of control. He was second in the Eastern League in ERA behind Steve Adkins. Mike got a late call-up to Buffalo, where he was 1-3 with a 5.83 ERA and 25 walks in 41 innings.

York did better in his second crack at AAA, with a 8-7, 4.20 record. He struck out 130 in 158 2/3 IP but walked 78, tying Kevin Blankenship for the American Association lead. Baseball America named him the #9 prospect in the league, between Moises Alou and Derrick May. He spent four games late in the year with the 1990 Pirates, with a 1-1, 2.84 record.

A free agent, the fastball pitcher was picked up by the San Diego Padres. York lost a bid for the 5th spot in the Padres starting rotation to Dave Eiland. Assigned to the Las Vegas Stars, York had a 5-7, 4.79 record with 55 walks to 54 strikeouts in 88 1/3 IP. Mike wound up back in the Pittsburgh system to finish the year and had a 4-1, 3.06 record in six starts for Buffalo, though control again was a problem (20 BB in 32 1/3 IP).

It is unclear what happened after that as York did not pitch in Organized Baseball or the major international leagues in 1993 or 1994.

York struggled in his final crack in affiliated leagues, going 0-1 with a 8.10 ERA and 12 walks to 1 strikeout in 10 IP for the 1997 Oklahoma City 89ers and having a 5.06 ERA and a no-decision in his lone game for the Tulsa Drillers. He spent most of the season with the Torreon Cotton Dealers in the Mexican League, going 10-6 with one save and a 4.59 ERA, though he walked 74 in 100 IP, possibly leading the LMB.