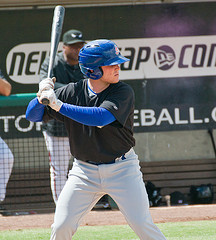 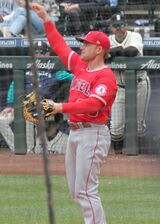 He attended Yuba City High School, where his father Jim Stassi was head coach. In the 2006 Pan American Under-16 Championship, he helped the US win Gold, hitting .310/.394/.483 with 10 runs and 8 RBI in 9 games as their starting catcher. In the non-IBAF-sanctioned 2007 World Youth Championship, he batted .421/.450/.474 with 7 runs in 5 games for the US. In the Gold Medal game, he hit third and played left field, going 1 for 2 with a run before exiting in a win over Brazil. In the 2008 World Junior Championship, he was the starting catcher for the US but bombed, going 3 for 23 with no walks or extra-base hits. Opponents stole 7 bases in 7 tries. In the Gold Medal game, he went 0 for 2 in a loss to South Korea's Yung-hoon Sung.

He hit .538 with 11 home runs and 38 RBI as a senior and .513 for his high school career. Following that season, he was selected by the Oakland Athletics in the fourth round of the 2009 amateur draft. He was expected to be a first-round pick by many but fell due to high salary demands. He wound up signing for a $1.5 million bonus, which was in the normal range for a late first-round pick. It was a record for a 4th-round selection. He had not made the Baseball America high school All-American team as Bryce Harper was picked as the first-team catcher and J.R. Murphy as second-team. The scout was Jermaine Clark.

He made his pro debut that summer with the AZL Athletics, appearing in just one game before being promoted to the Vancouver Canadians the next day. In 13 games for the club, he hit .286 with 8 RBI. Baseball America rated him as Oakland's 4th-best prospect. With the Kane County Cougars in 2010, he hitting .229/.310/.380 in 110 games and tied for the team lead with 13 homers. He fanned 141 times in 411 at-bats, had 14 errors and 10 passed balls. Baseball America downgraded him to Oakland's #6 prospect.

Max was traded to the Houston Astros just prior to the opening of spring training in 2013, coming to Houston on February 4th alongside OF/1B Chris Carter and P Brad Peacock in return for SS Jed Lowrie and P Francisco Rodriguez. He was assigned to the AA Corpus Christi Hooks of the Texas League and did very well there, as after 80 games, he was hitting .277/.333/.529 with 20 doubles, 17 homers and 60 RBI in 76 games.

Stassi was called up to the Astros on August 20, 2013, one day after Carlos Corporan had suffered a concussion that had forced infielder Jake Elmore to catch a few innings. He made his debut the same day when he was inserted as the team's designated hitter and 7th place hitter against the Texas Rangers. He struck out swinging against Travis Blackley in his first at-bat in the 2nd, then singled off Jason Frasor in the 4th, but was tagged out at second a few moments later on a baserunning blunder, leaving the base after he thought wrongly that he had been forced out. He added another single in the 7th as Houston lost the game, 5-2. His first RBI was a painful one as he was hit in the face by a pitch from Texas reliever Tanner Scheppers with the bases loaded in the 8th inning on August 21st. The ball first hit his shoulder, softening the blow a bit, but he was still removed from the game and taken to hospital. He missed a month of action because of the resulting concussion. He made a final appearance on September 23rd when he caught 3 innings, his first action in the field.

After playing for the Astros each season from 2013 to 2017, but never getting into more than 14 games in any of these, he finally won a permanent job as the team's main back-up catcher in 2018. He ended up playing more than expected as starter Brian McCann began to show his age. In 88 games, he hit .226 with 8 homers and 27 RBIs, disappointing production for someone whose strength was supposed to be with the bat. The Astros acquired defensive whiz Martin Maldonado for the stretch run and he and McCann saw all of the action in the postseason. In 2019, he was backing up Robinson Chirinos in the early going, with McCann and Maldonado having both left in the off-season, but hit just .167 in 31 games. The Astros decided to make an upgrade at the trading deadline, re-acquiring Maldonado, and then making room for him by sending Max to the Los Angeles Angels in return for a couple of low-level minor leaguers.

Stassi's father and great uncle Sam Stassi played minor league ball and brother Brock Stassi and great-great uncle, Myril Hoag, played in the majors. Some sources list his great-grandfather Sam Stassi Sr. and grandfather Bob Stassi as playing in the Pacific Coast League, but BR Minors does not list either as of March 2012.