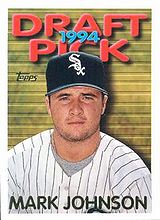 Catcher Mark Johnson played eight years in the majors and more recently was a minor league manager. Because he was the contemporary of two other major league players with the same name, first baseman Mark Johnson and pitcher Mark Johnson, he was sometimes called Mark L. Johnson.

Born in Colorado, Johnson attended Warner Robins High School in Warner Robins, Georgia. In the 1993 World Junior Championship, he hit .300 as the backstop for the Silver Medal winners. He was taken by the Chicago White Sox in the first round of the 1994 amateur draft, 26th overall, and began his pro career that summer. His first two pro seasons were modest with the bat - in 1994 he hit only .241 in 32 games, while in 1995 he hit .182 in 107 games. In 1996, he improved to .257 in 67 games with the South Bend Silver Hawks, but in 18 games of Class-A advanced ball with the Prince William Cannons that year, he hit .241.

Great at drawing walks, Johnson walked 106 times and struck out only 85 times in 1997, hitting .252 for the Winston-Salem Warthogs. With the AA Birmingham Barons in 1998, he had a good year, batting .283 with 105 walks and only 72 strikeouts. That earned him a promotion to the majors, and on September 14th, at the age of 22, he made his big league debut, going 0-for-1 against the Detroit Tigers. He went just 2-for-23 in 7 games for the White Sox that September, but he made the best out of both hits: they were both triples. His first came off Pedro Martinez on September 19th, and his second came off Scott Service on September 25th.

Johnson spent his entire 1999 season with the White Sox, hitting .227 with 4 home runs and 16 RBI in 73 games as a backup to Brook Fordyce. He and Fordyce split time behind the plate for the Sox to start 2000, but Charles Johnson was acquired at the trade deadline and took over as the team's primary backstop. Mark ended the year with a .225 average, 3 homers, and 23 RBI as Chicago won the AL Central title. However, he did not play in the postseason.

Johnson split 2001 between Chicago and the AAA Charlotte Knights. Backing up Sandy Alomar at the big league level that summer, he hit .249 with 10 sacrifice hits - good for fourth most in the American League. He got into 86 games for the Sox in 2002, splitting time behind the plate with Alomar, but hit just .209. Following the season, he was traded with Keith Foulke, Joe Valentine, and cash to the Oakland Athletics for Billy Koch and two players to be named later (who would end up being Neal Cotts and minor leaguer Daylon Holt).

Johnson spent most of 2003 in the minors, hitting .228 in 51 games for the Sacramento River Cats. In the 13 games in the bigs that year, his average was .111. After that season, he became a free agent and signed with the Milwaukee Brewers. Like the season before, he spent most of the summer in the minors, hitting .259 for the Indianapolis Indians. His time in the majors was again unimpressive: he went just 1-for-11 in 7 games.

During 14 seasons in the minors, Johnson hit .252, while in eight seasons in the majors he hit .218. Despite his low average, he showed a fairly good eye at the plate, with 124 walks and 197 strikeouts in his big league career. Other than a scattering of appearances at designated hitter, he never played any other position in the majors than catcher. He was regarded as reliable defensively - his career fielding percentage was .993.

Since his playing days, Johnson has managed in the Cubs organization. He led the Boise Hawks in 2011 and 2012 before moving on to the Kane County Cougars in 2013. In 2014, he led the Cougars to a 91-49 record, the best mark in the minors that year, and won the Midwest League crown. He moved on to the Myrtle Beach Pelicans in 2015.