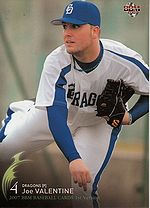 Joe Valentine is a pitcher who played three seasons in the majors.

Originally drafted by the Chicago White Sox in the 26th round of the 1999 amateur draft out of Jefferson Davis Community College, Valentine began his professional career that year. Splitting time between the AZL White Sox and Bristol White Sox, Valentine went a combined 0-0 with a 5.57 ERA in 14 relief appearances. He then missed the entire 2000 season.

Valentine greatly improved in 2001, going a combined 7-3 with a 1.79 ERA in 57 relief appearances. He split time between the Kannapolis Intimidators and Winston-Salem Warthogs, saving 22 total games and striking out 83 batters in 75 1/3 innings of work. His time with the Warthogs was especially impressive - with them, he appeared in 27 games, saving 8 games and posting a 5-1 record with a 1.01 ERA.

On December 13, 2001, Valentine was drafted in the 2001 Rule V Draft by the Montreal Expos. That same day, the Detroit Tigers purchased him in what was a pre-arranged deal. On April 5, 2002, he was returned to the White Sox by the Tigers, having failed to make the team.

In 2002, Valentine was a Double-A All-Star, Baseball America First team Minor League All-Star, and Southern League All-Star. He spent that entire season with the Birmingham Barons, making 55 relief appearances, posting a 4-1 record with a 1.97 ERA and saving 36 games. He also struck out 63 batters in 59 1/3 innings of work.

Pitching for the Sacramento RiverCats, Valentine slumped to a 1-3 record and 4.82 ERA, and was traded to the Cincinnati Reds with minor leaguer Jeff Bruksch and Aaron Harang for Jose Guillen. In 9 games with the Louisville Bats, he went 1-0 with a 0.79 ERA, prompting his promotion to the majors. Facing the Houston Astros on August 24th, Valentine appeared in his first big league game, allowing 1 run in 1 inning of work. He appeared in 2 games in the majors in 2003, posting an ERA of 18.00. Overall in the minors, he went 2-3 with a 4.10 ERA.

2004 was the first season in which Valentine had ever started a game professionally. He made 24 appearances for the Reds that year, making one start against the Montreal Expos, which he lost, and posting a 2-3 record with a 5.22 ERA. In 30 minor league appearances (9 starts), all with the Bats, he went 5-5 with a 5.01 ERA.

Signed by the Houston Astros for 2006, Valentine made 20 appearances with their Triple-A affiliate, the Round Rock Express. With them, he went 1-2 with a 4.70 ERA. In June, he was released, and in early July he was picked up by the Milwaukee Brewers. In 22 games with their Double-A affiliate the Huntsville Stars, he went 2-0 with a 2.97 ERA, saving 13 games. Combined, he went 3-2 with a 3.84 ERA in 61 innings that season.

Despite pitching well during the second half of the 2006 season, Valentine was granted free agency by the Brewers. He was not picked up by any major league baseball team, so he went to pitch in Japan with the Chunichi Dragons (he never actually pitched for them; he pitched for their farm team). They released him in June, and the Long Island Ducks of the independent Atlantic League picked him up. In 37 relief appearances with them, he went 4-2 with a 1.54 ERA, striking out 37 batters in 35 innings of work.

Valentine started the 2008 season with the Ducks, making 14 appearances with them, saving 6 games and posting a 2-1 record and 1.62 ERA. In May, the Phillies signed him and assigned him to their Double-A affiliate, the Reading Phillies.