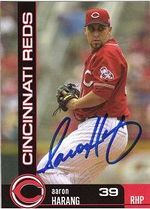 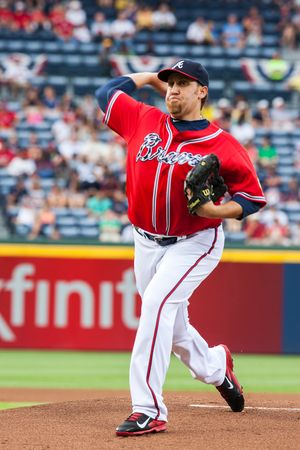 On July 23, 2007, Aaron Harang pitched a 10-inning no-decision against the Milwaukee Brewers. He had just returned from bereavement leave following the death of his grandfather. He was the first Cincinnati Reds pitcher to throw 10 or more innings in a game since Rick Mahler in 1989.

Harang was traded twice in the span of one week in 2013. First, he failed to secure a starting job with the Los Angeles Dodgers in spring training, even after going 10-10, 3.61 in 31 starts and 179 1/3 innings in 2012. On April 6th, he was sent to the Colorado Rockies in return for C Ramon Hernandez. The Rockies had no intention of using him however, simply wanting to get rid of Hernandez's salary, and immediately designated Harang for assignment with the intention of trading him again. They found a taker on April 11th, sending him to the Seattle Mariners in return for minor leaguer Steven Hensley. Ironically, he had been on the Mariners' radar screen for a while, but they had been unable to agree on a deal with the Dodgers. On June 11, 2013, he pitched one of the best games of his career for the Mariners, with a complete game two-hit shutout over the Houston Astros, 4-0. Overall, though, his season was less than stellar, as indicated by his record of 5-11 and 5.76 ERA in 22 starts. After giving up seven runs in three of his last five starts, he was released on September 1st, but was immediately signed by the New York Mets, who assigned him to the AAA Las Vegas 51s. He then made four starts for the Mets, going 0-1 with a 3.52 ERA. Between the two stops, he was 5-12, 5.40 in 143 1/3 innings.

On February 15, 2014, he joined the Cleveland Indians on a minor league contract with an invitation to spring training. He pitched well in spring, putting up an ERA of 2.00 for the Indians, but was still released on March 24th as there was no room for him on the opening day roster. He landed on his feet, however, as he was immediately picked up by the Atlanta Braves, who released veteran Freddy Garcia in order to add him. It seemed that the Braves were interested in Harang because he could be cut loose at no cost if he were to pitch poorly, whereas Garcia would have to be paid $1.25 million just for making the opening day roster. It was the Harang of 2006-2007, when he was one of the top pitchers in the National League, who showed up for his first start as a Brave on April 2nd, against the Milwaukee Brewers: he held Milwaukee hitless through the first 6 innings until Logan Schafer singled up the middle to start the 7th; his opponent, Matt Garza, who was making his first start for the Brewers, also was excellent, keeping the Braves from scoring through 6 innings. 3B Chris Johnson decided things with a solo homer off Garza in the 7th and Aaron got the credit for the 1-0 win. On April 18th, he pitched 7 no-hit innings against the Mets before leaving because his pitch count was at 121 already. Reliever Luis Avilan allowed a single to David Wright with two outs for the game's only hit as Atlanta won, 6-0. Harang lowered his ERA to 0.60 with that performance. He was at it again in his next start on April 23rd when he struck out 11 and limited the Miami Marlins to 1 run over 6 innings although he ended up with a no-decision. He fell back to earth on April 30th as he gave up 9 runs on 10 hits in 4 2/3 innings in a loss to the Miami Marlins. Overall, though, it was a solid year for Harang, who finished the season at 12-12, 3.57, the lowest ERA of his career. He pitched 204 1/3 innings and struck out 161 batters in what was his best season since he was briefly one of baseball's elite starters in 2006 and 2007.

He is the brother of minor leaguer Daryl Harang.