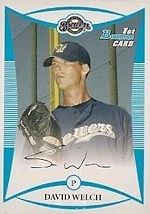 David Welch was a member of the Australian national team and has pitched as high as AAA.

Welch helped Australia win a Bronze Medal in the 2001 Asian Junior Championship. Out of junior college, Welch was picked in the 20th round of the 2005 amateur draft by the Milwaukee Brewers. He debuted with the Helena Brewers, going 4-1 with 3 saves and a 2.77 ERA, striking out 29 in 26 innings in 2005. In 2006, he went 8-6 with a save and a 2.41 ERA for the West Virginia Power, with a WHIP under 1. He held opponents to a .207 average, .156 by left-handed batters. Had he qualified, he would have been third in the South Atlantic League in ERA behind Matt Maloney and Carlos Carrasco.

In 2007, Welch went 6-7 with a 3.43 ERA for the Brevard County Manatees and walked only 21 in 120 2/3 IP. He was 9th in the Florida State League in ERA and allowed the fewest baserunners per 9 innings of any starting pitcher in the circuit. He was initially picked for the Australian national team in the 2007 Baseball World Cup, but was replaced shortly before the tournament began.

Welch spent 2008 with the Huntsville Stars, going 11-4 with a 3.93 ERA in his AA debut. He was 10th in the Southern League in ERA and two wins behind circuit leader Todd Redmond. He then made Australia's roster for the 2009 World Baseball Classic. Welch got the start in the make-or-break game against Mexico. He dueled Jorge Campillo scorelessly for two innings, but faded in the third. Karim Garcia and Miguel Ojeda opened with singles and Augie Ojeda hit into a run-scoring fielder's choice. Welch fanned Jerry Hairston Jr. but gave up a RBI single to Edgar González. Adrián González grounded home Augie Ojeda and Jorge Cantú doubled to make it 4-0. Brendan Wise relieved Welch after the inning. He was 8-8 with a 4.03 ERA back with Huntsville in 2009.

During the 2009 Baseball World Cup, Welch was one of Australia's top hurlers. He shut out Taiwan for five innings but got a no-decision as his bullpen fizzled. Facing Taiwan again, he allowed one run in 7 (a Ken-Wei Lin homer) while setting an Australian Baseball World Cup record with 13 whiffs. Against eventual champion Team USA, he tossed five shutout innings before a Justin Smoak homer and an unearned run in the 6th; Australia lost 4-3 with Tim Cox taking the defeat. He got the call in the 5th/6th place game and helped Australia to its best World Cup finish yet, holding the Dutch national team to one run in six. Only Cuba's Norge Vera fanned more than Welch's 27 in the Cup. He had a 1.13 ERA and only 3 walks in 24 innings.

In 2010, David gave up 22 hits and 16 runs in an awful 12 2/3 innings for the Mexico City Red Devils, somehow going 1-0. He also pitched for the Sioux City Explorers. On February 4, 2011, Welch threw a no-hitter for the Sydney Blue Sox against the Adelaide Bite in the Australian Baseball League playoffs.