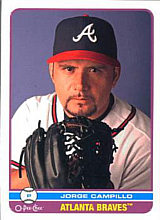 Outside of organized ball seasons, Jorge starred for the Mexican national team in the 2007 Pan-American Games. At the time, he was leading the Pacific Coast League in ERA, but took a break to join the national team. He tossed a 3-hit shutout against Panama, which had previously beaten Cuba (the eventual Gold Medal winners), to eliminate Panama and help Mexico to a Bronze. He again pitched for Mexico's national team in the 2009 WBC. He was 1-1 with a 6.23 ERA, allowing 14 hits in 8 2/3 innings. He did very well against Australia, allowing only a Brett Roneberg homer in a 16-1 win. Against Cuba in a make-or-break game, Campillo only lasted four innings as Mexico was eliminated; he gave up five runs in a loss to Norge Vera.