Note: This page is for major league outfielder Dan Robertson; for others with similar names click here 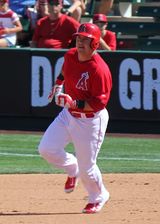 Dan Robertson is an outfielder who made his major league debut in 2014. He was selected by the San Diego Padres in the 33rd round of the 2008 amateur draft out of Oregon State University. The scout was Andrew Salvo. While never considered more than a marginal prospect, in part because of his small size, he has hit well everywhere he has played.

He began his professional career by putting up an outstanding .377/.443/.497 batting line in 73 games for the Eugene Emeralds of the Northwest League in 2008. He led the Northwest League in hits (114, a NWL record; Jim Buckner had held the old mark for 36 years), average, runs (59), OBP, outfield assists (12) and total bases (150), was second in RBI (45, four behind Mike Loberg), third in steals (20) and tied Charlie Blackmon for third with 21 doubles. He was named NWL MVP, the second straight Emerald to do so (after Luis Durango). Baseball America did not name him as one of the league's top 20 prospects, even though outfield mate Blake Tekotte was picked with worse numbers.

Robertson was promoted to the AA San Antonio Missions in the Texas League in 2011 and continued to hit. On May 2, he hit for the cycle in a game against the Midland RockHounds, going 4 for 6 with 6 RBI in a 17-6 win. He finished the year at .283/.370/.393 with 97 more runs, 20 steals in 26 tries and 17 assists. He tied for 9th in the Texas League in steals and was second in runs (8 behind Tim Wheeler). He was three assists shy of leader Jeremy Barfield. Among Padres minor leaguers, he was second in runs as well, 22 shy of Jedd Gyorko.

Robertson opened 2014 in AAA for the third year, starting well with the El Paso Chihuahuas (8 for 22, 2 2B, 2 HR, 6 R, 5 RBI). The Texas Rangers bought his contract. In his major league debut on April 29th, he pinch-ran for Shin-Soo Choo in the 7th inning of a loss to the Oakland A's. He stayed in at DH and fanned against Sean Doolittle to end the game. The next day, he got his first hit, a single off Jim Johnson.

On November 20, 2014 Robertson was traded by the Rangers to the Los Angeles Angels for a player to be named later.