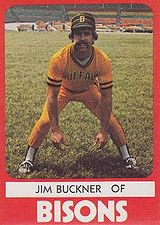 Jim Buckner, the brother of major leaguer Bill Buckner and scout Bob Buckner, and cousin of major leaguer Matt Carson and college coach Clayton Carson, played minor league baseball from 1972 to 1981. He played parts of 4 seasons in AAA, including one full year in Mexico. He stole over 200 bases in the minors and led his leagues in several categories.