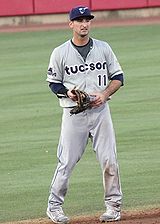 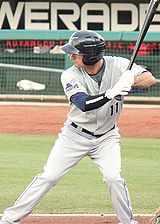 Dean Anna made his major league debut in 2014.

Acquired by the New York Yankees in return for pitcher Ben Paullus on November 21st, he managed to win a job as a back-up with the team during spring training in 2014, although given the age and uncertain health of may of the Yankees' regulars, he was expected to see significant playing time. He made his debut on April 4th against the Toronto Blue Jays as the starting shortstop in place of Derek Jeter, after 554 games in the minor leagues. He went 1 for 4 with a run and a walk, his first big league hit a single off Jeremy Jeffress in the 9th inning. He hit his first major league homer against Clay Buchholz of the Boston Red Sox on April 10th, a solo shot in a 4-1 Yankees win. On April 19th, he had to play a more unfamiliar position as he was called on to pitch the 8th inning of a game against the Tampa Bay Rays in which the Yankees were already trailing, 14-1, after starting the game at shortstop. He gave up a pair of runs on three hits in what was his first pitching appearance as a professional. The fairy tale only lasted so long, however, as on April 24th, the Yankees, desperate for pitching with Ivan Nova lost for the season and Michael Pineda having been handed a ten-game suspension, sent him back to AAA to add a couple of arms. He was hitting only .136 with a homer and 3 RBI. Apart from a lone at bat with the St. Louis Cardinals in 2015, this April stint was the entirety of his big league ride. In February 2019, Dean announced his retirement.