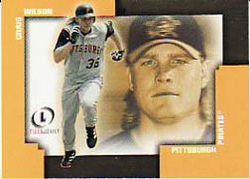 Craig Wilson hit 99 home runs during his major league career, with an OPS+ over 120 three times.

He was selected in the second round of the 1995 amateur draft by the Toronto Blue Jays. Assigned to the Medicine Hat Blue Jays and produced at a .283/.367/.484 clip. In 1996, Craig batted .261/.316/.402 for the Hagerstown Suns while splitting time between catcher and the outfield. On December 11, he would (in retrospect) become the key catch for the Pittsburgh Pirates in the nine-player deal that saw them trade Orlando Merced, Jay Bell and Dan Plesac to Toronto for six prospects.

Craig returned to AA in 1999 and batted .268/~.341/.508 for the Altoona Curve, playing first base, the outfield and DH in addition to catching. He homered 20 times that year, but struck out 104 times in 362 AB. Moving up to the Nashville Sounds in 2000, Wilson hit .283/.383/.604 with 33 homers, tied for fourth in all of minor league baseball behind Alex Cabrera, Phil Hiatt and Ernie Young. He was also 4th in slugging, second in the PCL and made the league All-Star team at catcher. His 15 passed balls led the league. The Pirates did not feel Craig was even deserving of a September call-up despite this impressive display.

In 2001, Wilson hit .289/.333/.444 in only 11 games with Nashville and spent the rest of the year lighting up the National League with a .310/.390/.589 turn for the 2001 Pirates. Despite being the team's second-most-productive hitter (right behind Brian Giles), Wilson was rarely used behind worse hitters like Keith Osik (a 591 OPS) (39 games at catcher to Craig's 10), a faded Kevin Young (709 OPS, 137 games at 1B to Craig's 26) and Derek Bell (575 OPS, 46 games in the outfield to Wilson's 14). Manager Lloyd McClendon kept vouching for having such a fine bat on the bench as Craig tied the record for most pinch-hit homers in a season (7, set a year earlier by Dave Hansen) while refusing to employ him ahead of much worse veterans. Fan speculation about this included the theory that McClendon, a fellow right-handed C/1B/corner OF who had shown significant pop in the minors, had been used off the bench, and saw Wilson like himself. He made the 2001 Topps All-Star Rookie Team despite his limited role.

2002 saw Wilson play fairly regularly as a utility man, hitting .264/.355/.443 while playing right field, first base, catcher and left field. His 16 homers tied for third on the team and he continued to be the second-best hitter on the club behind Giles. He led the 2002 NL by getting hit by 22 pitches.

New GM Dave Littlefield obviously did not feel comfortable with such a threat, so he signed Randall Simon, Kenny Lofton Reggie Sanders, and Matt Stairs to man the outfield and first in addition to Giles. Forced to the bench, Wilson again hit well at .262/.360/.511, behind Giles and Sanders among the team's offensive threats. His 18 homers were third on the club despite having no regular position.

Wilson started off with a bang with the 2004 Pirates after free agent signee Raul Mondesi was a bust in his right field slot. Fans loved his new long hair and his ranking among the 2004 NL leaders in many statistics early in the season. He faded in the second half but still hit .264/.354/.499; his 169 strikeouts were second to Adam Dunn in the league and he led the loop by getting plunked 30 times. Wilson led the team in runs (97), homers (29) and tied Jason Bay for the RBI lead (82). Only Bay had a more productive season as Craig was one of the club's top three hitters for a fourth straight season.

Littlefield, still trying to replace Wilson with a past-their-prime free agent for the third straight year, signed Matt Lawton to man right field for the 2005 Pirates. He missed 96 games due to two finger injuries but still hit .264/.387/.421 to trail only Bay among the Bucs' OBP leaders.

After trying and failing to trade away Wilson, Littlefield was again forced to sign a washed-up veteran to replace one of his team's top threats. This time, he picked up Jeromy Burnitz to play right and traded for Sean Casey to block Wilson at first. Wilson kept on outhitting the players Littlefield threw money at and batted .267/.339/.478 while again showing 20-30 home-run power. Clearly, he had to be displaced so Littlefield traded him on August 1 to the New York Yankees in return for a pitcher with a 7 ERA, Shawn Chacon. The move was widely criticized by Pirates fans and the media for giving away an average 1B/RF for one of the least-productive pitchers in baseball. Craig only hit .212/.248/.365 in 40 disappointing games in New York.

Wilson was signed by the Atlanta Braves for a one year, $2 million deal for 2007. After hitting just .172/.304/.259 in 24 games while platoon partner Scott Thorman was slugging .490, Wilson was unconditionally released on May 17. Additionally, the team wanted to keep Jarrod Saltalamacchia on the big-league roster after Brayan Pena returned from the disabled list. Wilson was then signed by the Chicago White Sox, who assigned him to the Charlotte Knights. Wilson batted .180/.275/.262 in 15 games for Charlotte. He then had arthroscopic surgery on his right shoulder for an injury that had been plaguing him all year. He missed the rest of the year.

Wilson was signed by the Cincinnati Reds but was cut on the first day of spring training due to his shoulder limitations. He failed a physical. The Pirates resigned Wilson to a minor league deal in April and assigned him to the Indianapolis Indians. As their regular first baseman, he hit .230/.327/.396 in 71 games, with 10 home runs and 60 strikeouts in 217 AB. He was traded in mid-July to the Seattle Mariners for a player to be named later.