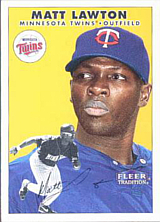 Matt Lawton was suspended 10 games on November 3, 2005 for testing positive for steroids. He served his suspension at the start of the 2006 season. Unlike other players, Lawton did not appeal and was very apologetic and up front about his steroid use. He tested positive for a veterinary steroid often used with horses, Boldenone.

He is the brother of Marcus Lawton.