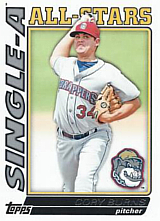 On December 16, 2011, he was dealt to the San Diego Padres for outfielder Aaron Cunningham. He started 2012 with the Tucson Padres and went 1-2 with 3 saves and a 2.63 ERA in 53 games, striking out 77 and walking 16 in 65 innings while allowing a .193 average. He was called up when Kip Wells was DFAed and made his major league debut on August 4, 2012, relieving Brad Boxberger in the top of the 5th with a 4-1 deficit against the Mets. He walked David Wright, retired Ike Davis on a grounder, then allowed a single to Daniel Murphy and a walk to Mike Baxter to load the bases. He escaped the jam by fanning Andres Torres and getting Josh Thole to line out to deep center. The next inning, he fanned Jeremy Hefner, gave a Ruben Tejada single, then retired Jordany Valdespin. After an intentional walk to Wright, he was replaced by Alex Hinshaw, having given up no runs but five baserunners in 1 2/3 innings in his debut. He was adequate in his trial run, going 0-1, 5.50 in 17 games (18 innings). The Texas Rangers snagged him in an offseason deal and he was decent in 10 games, pitching to a 3.18 ERA in 11 1/3 innings. But it was not decent enough to stick around. He bounced around several teams minor league chains, last spotted in the New York Mets system in 2017.