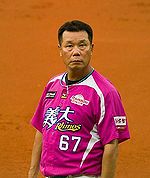 Chu-Ming Lee was a member of the Taiwan national team for almost a decade, including two trips to the Olympics, then played and coached in Taiwan's pro leagues.

He was with Taiwan for the 1985 Asian Championship, 1985 Intercontinental Cup and 1986 Amateur World Series (when Taiwan won Bronze). Lee helped Taiwan take home Gold at the 1987 Asian Championship. In the 1987 Intercontinental Cup, Lee led all players in the round-robin phase with 25 hits. He hit .500 and slugged .909 and joined Luis Casanova and Tai-Chuan Chiang on the All-Star outfield. Only Alejo O'Reilly and Orestes Kindelan posted better averages.

From 1984-1989, Lee had played for the Brother Hotel team. When the Chinese Professional Baseball League was formed, he remained with the club run by that hotel chain, the Brother Elephants.