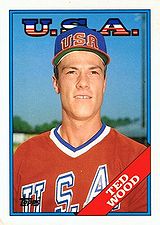 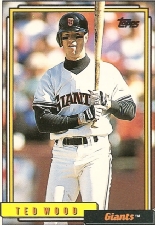 Ted Wood was a collegiate star at the University of New Orleans. His teammates there included Brian Traxler and Joe Slusarski.

Ted stood out for Team USA in international competition in the late 1980s. He helped the US win the Silver Medal in the 1987 Pan American Games. He hit .404/.517/.638 in the 1988 Baseball World Cup with 14 runs and 14 RBI in 13 games. Wood tied Omar Linares for fifth in the tournament in hits and just missed the top 5 in RBI. He was signed as a 1st round pick in the 1988 amateur draft by the San Francisco Giants and scout Andy Korenek.

The first-round draft pick never got an extended trial in the majors, as he appeared in just 47 games from 1991 to 1993. He continued to chase the dream longer and farther than most ballplayers, though. After playing at Triple-A through 1995, Ted spent a summer in Mexico and - seeking the best available salary - three in Taiwan. He then gave it one last shot in Korea but reached the end of the line in May 2000.