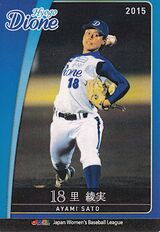 Ayami Sato has been one of the greatest players in women's baseball. She was the first two-time Women's Baseball World Cup MVP and then the first three-time winner; as of 2021, she is the only multiple MVP winner. She set several records in the Japan Women's Baseball League, including most career complete games and most strikeouts and complete games in a season. Through 2021, she had won part of five Women's Baseball World Cup champions; she was second in ERA in her first two before winning her three straight MVPs.

She debuted for Japan in the 2010 Women's Baseball World Cup. She went 3-0 with a 0.53 ERA, beating Puerto Rico and shutting out Venezuela. Against the US, she entered with two on a 1-1 tie in the 5th, relieving Yui Shingu and allowing two hits and no walks or runs in escaping that jam and wrapping up the win. That eliminated the US from a shot at the Gold Medal. Japan turned to Yukari Isozaki for the finale as they won the title; Sato was named the Cup All-Star starting pitcher. She was second to teammate Kasumi Noguchi in ERA, second to Marti Sementelli in strikeouts (14 to 11) and led in wins. [1]

She has coached for Fukuchiyama Narumi High School. She made her Japan Women's Baseball League debut with North Reia in 2013. She led the league with 62 strikeouts as a rookie. [3]

She pitched three relief outings in the first two rounds of the 2014 Women's Baseball World Cup, with no runs in five innings. She got the call in the Gold Medal game against the USA, though, and outdueled Sarah Hudek, 3-0. She allowed 7 hits to Hudek's 4 but allowed no walks. She led the Cup with two wins (having gotten a relief win against Canada), with a 0.00 ERA (tied with others, but none with as many innings as her 12) and 10 strikeouts (one ahead of Keila Aranguren). While teammate Nana Sasanuma was named the Cup All-Star SP and Hudek the All-Star RP, Sato got the big award, the MVP. The 2012 MVP, Isozaki, also had gone to Shobi University. Japan won its fourth straight Women's Baseball World Cup and she had played a role in three of these wins. [4] 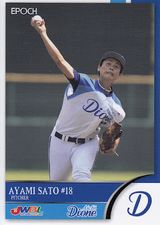 She was again dominant in the 2016 Women's Baseball World Cup. In the opener against Canada, she threw a three-hitter, fanning 11 and allowing two runs in a win. She then beat Venezuela, which would win the Bronze Medal. In the Gold Medal game, she again got the call against Canada and was even better than in the opener, pitching a two-hit, one-walk shutout (though her Ks were down to 5). She led the event with 21 strikeouts (5 ahead of Amanda Asay) in 21 innings, allowing only 10 hits and two walks. She was 3-0 with a 1.33 ERA. She was the only Japanese pitcher who allowed a run but led the event in wins and had the toughest calls of any Japanese hurler, as she faced the #2 team twice and the #3 team and beat them all. She repeated as MVP and this time was also named the All-Star starter. [6]

The Kagoshima native kept on rolling in the 2018 Women's Baseball World Cup. In the opener, she pitched one shutout inning (1 H, 3 K) to close out Rina Taniyama's win over the Dominican Republic. Facing #2-ranked Canada, she won, 2-1; she allowed 6 hits, 3 walks and a run in 6 innings while striking out 7. Akino Tanaka closed out the win. She then shut out the US in a 3-0 game, outdueling Stacy Piagno. She had a no-hitter with one out left before Megan Baltzell singles. She struck out two and hit two while walking none. In the round-robin phase, she was 4th in ERA (behind Yu-Ying Hsieh, Nana Ishimura and Taniyama), tied Loes Asmus for 2nd in Ks (behind Rak-yung Kim) and tied Allison Schroder for 4th with a .167 opponent average. In the finale, she got the nod with two days' rest. Sato had a solid outing (5 IP, 6 H, 0 BB, 1 HB, 6 K) to beat Taiwan; Tanaka saved the 6-0 win. She won her third straight MVP, though Chiao-Yun Huang beat her out as the All-World SP. [8]