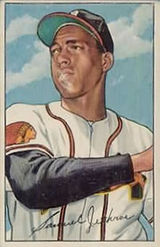 Sam Jethroe was a fleet-footed Negro League player who eventually played three years in the major leagues, starting in 1950 at the age of 33. He was Rookie of the Year in 1950 with the Boston Braves. A bonafide speed merchant, Jethroe stole 98 bases in three full major league seasons and was pretty good hitter, besides. After being demoted to the minors way past his prime, Jethroe played until age 41, compiling a sterling .295 career minor league BA, and an OBP close to 40 percent.

Jethroe played semi-pro ball for the East St. Louis Colts and St. Louis Giants and appeared briefly with the 1938 Indianapolis ABCs, then played from 1942 to 1948 with the Cincinnati Buckeyes and Cleveland Buckeyes of the Negro American League. He hit .487 his first year, but did not play enough to qualify for the league lead in average. He did appear in both editions of the East-West Game that year; he was retired as a pinch-hitter in the first and went 1 for 5 with a run scored as the leadoff hitter and center fielder for the West in game two. In 1943, when the club moved to Cleveland, he hit .291 but led the NAL in doubles (8) and triples (4). In 1944, the 26-year-old flyhawk hit .353 to lead the league; he also led the loop in stolen bases (18) and doubles (14). He went 0 for 3 in the 1944 East-West Game, but threw out Josh Gibson at the plate during the game.

An indisputable Negro League star, Jethroe had a tryout with the Boston Red Sox, which was held as the result of political pressure in Boston in 1945. The tryout included him, Jackie Robinson, and Marvin Williams, and took place in front of 78-year-old Hugh Duffy (who was said to have remarked, "they looked good to me"), Joe Cronin, and Tom Yawkey. But none of the players were taken by the Red Sox at that point.

Jethroe continued to shine in Cleveland, hitting .393 to lead the NAL for the second straight season, and leading in triples for the second time (10) and in steals (21) for the second time. he was arguably the league's brightest star, outshining the likes of Jackie Robinson and Satchel Paige. He hit .333 to lead Cleveland past the Homestead Grays in the Negro World Series.

In 1946, "The Jet" hit .310 (5th in the league), homered six times (second to Willard Brown) and led in steals once more with 20. While no data are available for doubles and triples, it would be fair to presume he remained among the leaders in those categories as well. In the 1946-47 Cuban Winter League, he led the league with 22 steals and batted .300, good enough to place fourth. In the first East-West Game of 1946, Jethroe hit third for the West and went 0 for 4 with a run. In game two, he again hit third and was 0 for 3 with a run (and a steal this time).

Jethroe hit .340 in 1947 but other statistical data are much more limited as the Negro press more closely followed the integration of Major League Baseball instead of the Negro leagues. In the Negro World Series, he went 6 for 19 and was stranded on third in a tied game one when the rain came down. For the first time, Sam put up a fine show in the East-West contests. In game one, he was 1 for 3 with a triple, RBI, run, steal and hit by pitch in the West's 5-2 run, again hitting third. In game two, he was 3 for 5 with a triple, run, 4 RBI and steal in the West's 8-2 victory. Overall, Jethroe hit just .208/.269/.375 in his 24 AB in East-West contests, albeit a small sample size against the best of Negro League competition.

The Brooklyn Dodgers were concerned that they had too many black players to suit all of their fans, so they traded Jethroe with Bob Addis to the Boston Braves for Don Thompson, Damon Phillips, and Al Epperly. In Boston, although Jethroe was Rookie of the Year, he was the subject of much criticism and racism. He roomed with basketball star Chuck Cooper.

He ran Jethroe's Bar and Restaurant in Erie, PA, for 30 years. When things got tough, he sold his Rookie of the Year trophy. His home burned down, and he lived in the Bar. He sued Major League Baseball, saying that he had not been able to receive a pension due to racism which prevented his breaking in. The case was dismissed as having been brought after the statute of limitations had passed. Eventually, though, Jethroe and some other Negro League players began receiving limited pensions from Major League Baseball, perhaps as a recognition that it was good public relations.