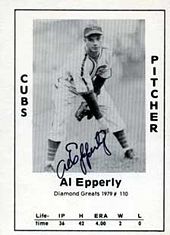 Al Epperly was signed as an amateur free agent by the Boston Red Sox before the 1936 season with no idea he would still be in the game of baseball 17 seasons later. The eighteen-year-old pitcher was assigned to the Eau Claire Bears of the class D Northern League. In his first season in the pros, he finished at 13-8 with a 4.41 ERA while pitching 196 innings and helping his team to the play-off Championship.

This would be his first of eight double-digit winning seasons during his 17-year run. The Chicago Cubs pried him away from the Red Sox via a minor league working agreement with the Eau Claire club, and the young pitcher threw a 14-6 record at the Three-I League for the Moline Plowboys in 1937, again helping his teammates to the play-off title.

Unknown at the time, Al "Pard" Epperly, was getting ready to go a dozen years between stints in the majors. He was just twenty years old in 1938 when the Cubs debuted him with his first big league start and victory by the score of 21-2 over the Philadelphia Phillies. He went 2-0 in nine games for his team before being sent down to the Indianapolis Indians of the American Association, where he finished out the year at 4-6, appearing in 18 games. The Cubs, of course, went on to win the National League pennant and were crushed by the New York Yankees, four games to none, in the 1938 World Series, but Epperly was no longer with the team by then.

Al indicated that he hurt his arm in 1938 and again very badly in 1941. As a result, he became an underarm relief pitcher in the minors for years. [1]

It would be some twelve years after 1938, missing more than a whole decade, before "Pard" took the mound in a major league ballpark again. He appeared in five games with no decisions out of the Brooklyn Dodgers bullpen in 1950. This wound up his big league numbers at 2-0 and a 4.00 ERA while appearing in 14 games.

Throughout the 1940s and early 1950s he had success at the AAA level before and after serving in the Army during World War II in 1944 and 1945. Epperly went 16-5 for the San Francisco Seals of the Pacific Coast League in 1943 and was selected by the Chicago White Sox in that November's Rule V Draft. Al also went 15-4 for the St. Paul Saints of the American Association in 1951 and finished out his playing career in the early fifties having won 160 games while losing 127 with a 3.62 ERA. Al also pitched during the winters in Cuba.

Epperly retired in Davenport, IA, where for many years he served as chief deputy and captain of the postal division for the county sheriff's office. Al died April 14, 2003, at age 84 in McFarland, WI.