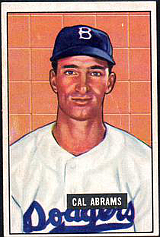 "There were different levels on the Dodgers. There were the stars and there was the rest of us. In all the time I was in Brooklyn, I only performed on Happy Felton's Knothole Gang show two times. [Carl] Furillo would go on a dozen times, [Duke] Snider would go on a dozen times, he [Felton] wanted the crowd pleasers, the guys who were supposed to be the stars. One time I recall I got $50 for doing the show, and I was to pick one of three youngsters, who in turn would choose a favorite player to speak to in the dugout. So I got a hold of this one kid, and I said 'Look, I'm going to pick you as the best fielder, and in turn I want you to say that you want to talk to me in the dugout.' That way I would get an extra $50. So he said 'All right.' And so I was throwing the ball to the three kids and Happy Felton says, 'Cal, who do you think is going to make it?' I said, 'Number 3.' And the kid who I had made the deal with comes over and Happy says, 'Congratulations, here's an autographed ball, a Baby Ruth candy bar. Now who do you want to talk to in the dugout?' I'm waiting there and the kid says, 'Carl Furillo.' I almost died." - Abrams, recollecting on his Dodger days in Peter Golenbock's Bums

Outfielder Cal Abrams played eight seasons in the majors, finishing with a robust .386 on base percentage in limited play. One of the few Jewish major league players of his time, he played in 567 games with the Brooklyn Dodgers, Cincinnati Reds, Pittsburgh Pirates, Baltimore Orioles and Chicago White Sox. He may be best remembered for his unsuccessful mad dash home with the Dodgers that aided the "Whiz Kids" Philadelphia Phillies to a National League pennant in 1950.

Cal was signed by Joe Labate, Dodger scout, out of a Brooklyn high school in 1942 and assigned to the Olean Oilers of the Class D PONY League. He played 19 games that season and, on January 22, 1943 was inducted into the Army in New York City. He was assigned to Battery B 500th Anti-Aircraft Artillery and served in Europe and the Pacific with two battle stars in the Pacific. He was also awarded the Philippines Liberation Ribbon with one bronze star. After his release from the service on January 17, 1946, at Fort Dix, NJ, he played for the Danville Dodgers in the Class B Three-I League for the 1946 season. The next two seasons, Abrams was with the Mobile Bears in the Class AA Southern Association.

On April 19, 1949, Cal made his debut with the Dodgers and was promptly farmed out to the Fort Worth Cats of the AA Texas League for the rest of the season. With a loaded left field mix coupled with Duke Snider entrenched in center and Carl Furillo entrenched in right, Cal was unable to break through despite impressive minor league numbers. He split 1950 between the St. Paul Saints of the AAA American Association and the Dodgers, appearing in 38 games when an opening was created with a Furillo injury. On October 1, the Dodgers and Phillies met in a battle to determine which team would win the NL pennant and face the New York Yankees in the World Series. Abrams, making a spot start in left field, led off the bottom of the 9th inning with a walk and took second base on a Pee Wee Reese single. The next batter, Duke Snider, laced a clean single into center field. Phillies center fielder Richie Ashburn's arm was suspect at the time and Abrams was waved home by third base coach Milt Stock. But Ashburn's throw was on the money and Cal was dead meat at the plate. Even with second and third and one out, Robin Roberts was able to dance out of danger, allowing Dick Sisler to go deep on Don Newcombe in the top of the 10th and seal the Whiz Kids' berth in the World Series.

Even after a scorching start to the 1951 season, in which he was batting .470/.545/.697 at the end of May, Abrams was never able to crack the Dodgers lineup as a regular. He felt manager Charley Dressen "only played me enough to give me rope to hang myself." In a bizarre footnote, he was somehow not in Dressen's lineup card on "Cal Abrams Day" at Ebbets that year. He was told the Dodgers were looking to build a young ball club during the 1952 season and was flipped to the Cincinnati Reds after the acquisition of Andy Pafko to be the starting left fielder, a player who was actually older than him. He finally saw regular time at the age of 30 with the Baltimore Orioles in 1951, crafting an impressive .293/.400/.421 line in 115 games to lead the Orioles in hitting in their inaugural Baltimore voyage. But his keen batting eye could not keep him in the big leagues much longer. He had a cameo with the 1956 Chicago White Sox, then was sent to the Miami Marlins in the AAA International League in May. He retired the following year.

In all of his minor league seasons, his lowest batting average was .331. His career batting average as a big leaguer was a respectable .269, but in an era where high on-base percentages did not necessarily guarantee playing time, he was never able to log regular playing time during his physical prime.

Abrams died in 1997 after suffering a heart attack. He was buried in his Brooklyn Dodgers uniform.

Sources include Bums: An Oral History of the Brooklyn Dodgers by Peter Golenbock.