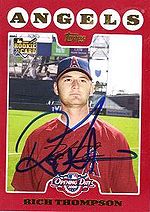 Rich Thompson debuted in 2007 as the 25th Australian pitcher in the major leagues.

In 2004, the right-hander was 3-2 with 4 saves and a 3.94 ERA for Rancho Cucamonga. He joined the Australian national team for the 2004 Olympics. Against Taiwan, he retired one batter after relieving John Stephens and before being relieved by Jeff Williams. He saw action against Greece as well, relieving a struggling Craig Anderson in the 3rd and pitching 3 innings of one-run ball before giving way to Ryan Rowland-Smith, the winning hurler.

Thompson spent a third year in Rancho Cucamonga in 2005, starting 15 games and relieving in 27. He was 6-8 with 3 saves and a 5.27 ERA. In 2006, he was again with the Aussie national squad. He relieved Adam Bright with a 5-0 deficit against Italy in the 2006 World Baseball Classic but struggled. Frank Catalanotto tripled but Thompson retired Mike Piazza on a grounder. Vincent Sinisi hit a homer to make it 7-0. Thompson then walked both Val Pascucci and Peter Zoccolillo before getting a double-play grounder from Mark Saccomanno. He retired Dustin Delucchi before being relieved by Anderson.

In 2007, he won one game for the NSW Patriots in the Claxton Shield competition in winter ball.

Thompson bounced around four teams during the 2007 season in the USA - he pitched two scoreless innings for the Quakes, was 2-3 with a 2.01 ERA in 21 games for Arkansas (.193 average allowed, 50 strikeouts in 49 1/3 IP), went 3-0 with a save and a 2.19 ERA in 16 outings for Salt Lake (32 K in 24 2/3 IP, .193 average) and made his major league debut. In between, he also pitched for the World Team in the 2007 Futures Game. He relieved Pedro Beato to open the 7th inning with a 7-2 lead. He struck out Jacoby Ellsbury on 10 pitches, Ellsbury fouling off 4 potential strike threes. Thompson then retired Colby Rasmus on a fly ball to left field. Emiliano Fruto relieved Thompson to finish off the victory.

Thompson was a September call-up to the Angels. He debuted against the Texas Rangers, relieving Chris Bootcheck in the 8th with a 7-3 deficit. He struck out Jason Botts and Jarrod Saltalamacchia before allowing a double to Ian Kinsler. He then retired Ramon Vazquez to end the frame. Jason Bulger replaced Thompson on the hill.

Thompson allowed 8 runs and 4 homers in 6 2/3 innings for the Angels. In the 2007 Baseball World Cup, Thompson allowed the losing homer by Osmani Urrutia to end Australia's first game, a 3-2 near upset of the Cuban national team. He was involved in a close call against the Venezuelan national team. Entering with two on and one out in the 9th, he threw a wild pitch but settled down to strike out the next two batters; Australia would win in the 11th. Overall, Thompson was 0-1 with a 2.45 ERA in three appearances in the 2007 Cup.

Thompson split the 2008 season between Salt Lake (1-0, 4.05 in 10 games), the AZL Angels on a rehab stint (2 saves, 3 runs, 13 K in 9 IP) and the majors (5 runs in 2 innings). He was on Australia's team for the 2009 World Baseball Classic. He tossed two scoreless innings in the win over Mexico. Against the Cuban national team, Rich entered with a 4-3 lead in the 8th inning. He gave up a leadoff single to Yulieski Gourriel and retired the next two hitters, but then served up a game-losing home run to pinch-hitter Yosvani Peraza to end the upset bid.