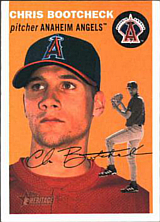 "Honestly, I don't remember," Austin [Bilke] said before putting his arm around me, "but he does have a little bit of Boot in him." Boot was Chris Bootcheck, the Angels' first-round draft pick in 2000 and Austin's personal hero. Boot stood six feet five inches with long arms and tan skin, and he had pitched for three years at Auburn before signing a seven-figure contract to play for the Angels. Boot was known for his animated way of telling stories and was widely regarded as the heaviest drinker in the organization, aside from Bobby Jenks, of course. Quan [Cosby] had explained to me that Boot was the reason we no longer had a day off during spring training. In his first month in Mesa, Bootcheck crashed his rental car into a ditch after a night of heavy drinking on the one day off of spring training. Realizing that he could be charged with driving under the influence, he stumbled home to his apartment without notifying anyone. The next morning, he informed Tony Reagins of the incident and the Angels quietly took care of the rest." - Matt McCarthy, from his memoir, Odd Man Out

Chris Bootcheck holds the distinction of being one of the very few major leaguers placed on the disabled list after a brawl. On May 2, 2006 he injured his hamstring running in from the bullpen to participate in a brawl playing for the Los Angeles Angels against the Oakland A's. He returned to the majors after a three-year absence for one game with the New York Yankees on June 14, 2013. Facing his old team the Angels, he gave up a run on two walks and two singles in his only inning of work. It would prove to be his final big league game. In 91 games (51 of which came in 2007), Boot's ERA was 6.55.

Bootcheck made his Nippon Pro Baseball debut on May 3, 2010. He allowed one run in the 9th inning against the Hiroshima Carp in a 3-0 loss for the Yokohama BayStars. He pitched to a 4.62 ERA in 15 games, then a 5.06 ERA the following year in 11 games with the KBO's Lotte Giants.