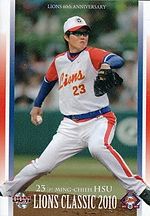 Ming-chieh Hsu first received international exposure as a player on the Taiwanese team that won the 1990 Little League World Series. He had a 2-2, 1.71 record in the 1993 World Junior Championship, walking one and striking out 13 in 21 innings for the Bronze Medal winners. He pitched for Taiwan in the 1995 Asian Championship. He was 0-1 with a 7.20 ERA in the 1995 Intercontinental Cup. Hsu was 1-1 with a 5.06 ERA for the Taiwan national team in the 1997 World Port Tournament. He rose to professional prominence in 1998 when the 21-year-old went 7-4 with a 2.52 ERA as the top Taiwanese native in the Taiwan Major League. The Taichung Agan ace was even better a year later, going 15-6 with a 2.83 ERA, third in the TML in ERA again and again the best of any native. He led his club to the TML title and was named championship series MVP. Three days later, he signed with the Seibu Lions of Japan's Pacific League, becoming the first Taiwanese performer in six years to go to Japan. He won Bronze in the 1998 Asian Games. In the 1999 Asian Championship, Hsu pitched for Taiwan.

In the 2007 Baseball World Cup, Hsu had a 4.35 ERA in four games for the host Taiwan team. He had no decisions. He retired all three batters he faced in the 2007 Asian Championship. Hsu pitched 8 2/3 scoreless innings in the 2007 World Port Tournament, saving one game in five appearances.