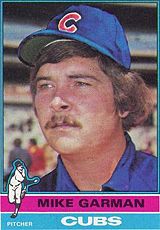 Mike Garman was born on September 22, 1949 in Caldwell, Idaho. He attended Caldwell High School and then went to Albertson College in his hometown. In the June 1967 amateur draft, he was the Boston Red Sox's first pick, third overall (Ron Blomberg was first by the New York Yankees).

In his first year of pro baseball, Garman really struggled with his control, allowing 43 walks in only 25 innings with the Winston-Salem Red Sox in the Carolina League (with one game with the Greenville Red Sox, in the Western Carolina League). In 7 starts, his ERA was 8.28 with a 1-4 record. Garman spent the 1968 season with Greenville. He made 16 starts and 4 relief appearances for a total of 99 innings. His ERA was 3.73 and his record 5-7 on a team that played .557 ball. He allowed 61 walks. He remained in A ball in 1969 but this time with Winston-Salem. For the first time, he showed why he was drafted so high, striking out a league-best 183 batters in 162 innings. His record was 10-12 with a 3.11 ERA. In September, he was called up by the Red Sox. He made two starts, winning his major league debut on September 22nd against the New York Yankees, allowing three runs in seven innings, despite giving up six walks. He was not involved in the decision in his other start.

In 1970, he was a starting pitcher with the Red Sox's main minor league affiliate, the Louisville Colonels of the American Association. Again his control was off with 132 walks in 156 innings, which led to a 4.79 ERA. He also threw 19 wild pitches. His record was 7-13 and he struck out 127. It was back to Louisville in 1971. His stats improved slightly, which meant 128 strikeouts in 129 innings, the best ratio on the team. He walked 88 and his ERA was 4.18 with a 8-7 record. He was called up in September. In three starts, he split his two decisions with a 3.86 ERA in 18 2/3 innings. Garman was very good in his last two starts, allowing 3 runs in 15 innings.

1972 was his third season with Louisville. He cut down on his walks with 69 in 149 innings, striking out 118 with a 4.23 ERA. His record was 11-9 and for the first time, he was used regularly in relief (he made 19 starts in 39 games). He got another taste of the majors in September and allowed only one hit in three innings in his first two outings, both in relief. His next game – and last of the season – was a start where he lasted only one third of an inning, allowing three runs. Because he was out of options, the Red Sox kept Garman on their roster out of spring training in 1973. He played only 12 games with no record, and he was used exclusively in mop-up situations. In 22 innings, he allowed 32 hits and 9 walks, which led to a 5.32 ERA. In December, he was traded to the St. Louis Cardinals along with two more young pitchers, Lynn McGlothen and John Curtis, for Reggie Cleveland, Diego Segui and Terry Hughes.

The trade benefited Garman. For the next two years in 1974 and 1975, he was a member of the Cards' bullpen. His weight was always a topic of discussion in spring training, but he always managed to get it where he wanted for the beginning of the season. It was during his time with the Cards that he was nicknamed “Pickles” by Bob Gibson, thanks to Garman’s habit of eating pickles in order to control his weight. His first year in St. Louis was among his best in the majors. In 64 games, his WHIP was a career best 1.14 and his ERA 2.64. More importantly, he allowed only 17 non-intentional walks in 81 2/3 innings. His record was 7-2 with 6 saves. In 1975, he was among the candidates to be part of the starting rotation but remained in the bullpen. His ERA was better at 2.39 but a little misleading with more runners on base and 10 unearned runs. He had 10 saves and a 3-8 record. His 65 games tied a team record. It was his last year in St. Louis. In October, he was acquired by the Chicago Cubs with minor leaguer Bobby Hrapmann for Don Kessinger.

In 1976, Garman was expected to help a pitching staff and especially a relief corps that had been hit hard the year before. But he played only one season with the Cubs, a season that was probably his worst in the majors. His ERA was 4.95 in 76 1/3 innings. His use was limited in August after he pulled a muscle swinging a fungo bat. In January, he was sent to the Los Angeles Dodgers with Rick Monday for Bill Buckner, Ivan DeJesus and Jeff Albert.

The right-handed pitcher had a very good year with the Dodgers in 1977, helping them to win the NL West title and then the NLCS against the Philadelphia Phillies. He had the best stretch of his career from mid-June to early September when he had 7 saves and a 1.44 ERA in 31 1/3 innings. However, he had three straight blown saves in the last month. For the season, his ERA was 2.73 in 49 games, with 12 saves. Against the Phillies in the postseason, he earned a save in Game 3, pitching a perfect 9th inning. In the 1977 World Series against the Yankees, he was summoned twice. In Game 1, he pitched three scoreless innings from the 9th to the 11th that kept the Dodgers in the game. The Yankees eventually won, 4-3. He also pitched in Game 4. All in all, he pitched 5 1/3 scoreless innings in the postseason, allowing only two hits and one walk.

In 1978, it was clear from the beginning that the Dodgers didn’t intend to use him in important situations. Not once did he pitch with his team ahead in the first month and a half. Then, on May 20th, he was traded to the Montreal Expos for two young hurlers, Gerald Hannahs and Larry Landreth. He was reunited with his first major league manager, Dick Williams, and immediately became the Expos’ number one reliever. He led the team with 13 saves but was rather inconsistent with 6 blown saves. His ERA with the Expos was 4.40 in 61 1/3 innings. His season was marked by an incident when he was involved in a heated argument with pitching coach Jim Brewer in early August. He had been used extensively after the All-Star Game with 11 games pitched in 14 days (he had 3 saves and a 2-1 record in that sequence). Garman took exception to being called again in one game, saying he was too tired, which did not sit well with Brewer. From August 6th to August 25th, he was not used at all and did not even warm up.

Despite his unspectacular season, most observers thought his place was secure with the Expos in 1979, although the Expos went shopping for a bullpen ace in the offseason and eventually signed free agent Elias Sosa. At the end of spring training, Mike was released when rookie David Palmer made the team. He played one last season in the minors that year. He first signed with the Pittsburgh Pirates organization. In the middle of the season, as he was playing with the Portland Beavers in the Pacific Coast League, he was traded to the Tacoma Tugs, the Cleveland Indians' AAA team in the same circuit, along with Taylor Duncan for Rob Ellis.