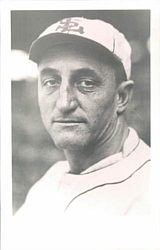 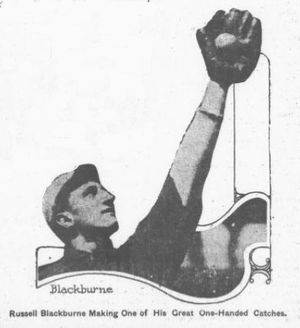 “Blackburne popped a small fly half way between first and the plate. It looked like it might go on foul ground, and was almost a certain out, as either [Senators first baseman Chick] Gandil or [catcher John] Henry could have handled it. But these considerations never checked Blackburne. He ran as though he had poled the ball to the center field fence. Then came the break. Gandil went after the ball, hesitated, then started again. It finally slipped through his fingers and rolled toward the Washington bench. Henry pounced on it, but Blackburne made such good time that he landed safely on second. Then [Shano] Collins poled a single to left that scored the run... Blackburne’s hustling qualities in running out the pop can readily be seen. Not all the players on the South Side team would have kept going.” - Chicago Day Book, August 8, 1914

Infielder Lena Blackburne began his pro career in 1908 and reached the majors with the 1910 Chicago White Sox. He missed the entire next season with a knee injury that plagued him the rest of his career. An article in the March 18, 1911 New York Times indicates manager Jimmy McAleer did not want to waive him, feeling that he could play better than he had shown in 1910. The article says Blackburne (called "Russell Blackburn") had been bought for $8,000 from Providence. After spending most of the next two years back in the minors, he returned to the White Sox in 1914 and 1915. Lena returned to the minors with the Toronto Maple Leafs in 1916 and 1917 before earning cups of coffee with the Cincinnati Reds, Boston Braves, and Philadelphia Phillies in 1918 and 1919.

Blackburne was back with the Maple Leafs in 1920 and replaced Larry Doyle as the club's skipper in 1921. After several more years in the minors as a player and manager of the 1925 Little Rock Travelers, he returned to the majors as a coach for the White Sox in 1927. He replaced Ray Schalk as the team's manager in July 1928 and held the job for a season and a half. He was a St. Louis Browns coach in 1930 and was once again skipper of the Maple Leafs in 1932, when they were affiliated with the Detroit Tigers. He joined Connie Mack's A's coaching staff in 1933 and remained with the team until 1938 and again in 1940, 1942 and 1943. He returned to the minors as a manager of the A's farm team, the Lancaster Red Roses, in 1944 and 1945 and then coached for the parent team again in 1947 and 1948. He later scouted for the Philadelphia/Kansas City Athletics from 1948 to 1955, briefly serving as interim manager of the Red Roses again in 1954.

After his playing career, Blackburne discovered a unique mud from the river beds in New Jersey near the Delaware River. This mud took the slippery sheen off baseballs. He marketed the mud and it has been rubbed on every baseball used in the major leagues since the 1950s. Since Blackburne died, the original mud pit has been developed, and a nearby secret location near the junction of the Delaware River and Rancocas Creek in New Jersey is the new home of the mud. Called "Lena Blackburne Baseball Rubbing Mud", it sells for $25 a pound.