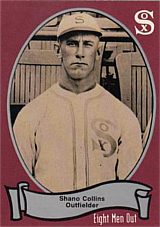 Shano Collins played sixteen seasons in the majors and was considered a good defensive outfielder with a strong arm. Though not a participant, he had an interesting role in the Black Sox scandal.

Collins began his pro career with the Haverhill Hustlers of the New England League in 1907. After not playing the next summer, he was with the Springfield Ponies of the Connecticut League in 1909 and hit .322. He was signed by the Chicago White Sox and hit just .197 as a rookie in 1910 while splitting time between first base and the outfield. After several years as a starter, Collins was platooned with Nemo Leibold beginning in 1917. Shano delivered in the clutch, rapping the game-winning hit in the pennant-clinching game against the Boston Red Sox on September 21st. He started all six World Series games and hit leadoff, collecting the team's first hit and scoring the first run of the Series. In 1918, he became the first man to belt three bases loaded triples in one season.

Shano split time with Leibold in 1919 but had no part in the fixing portion of the Black Sox Scandal, going 4-for-16 in the World Series. But... when indictments were brought against the implicated parties for their alleged actions, it was Shano who was listed as the wrong party on them, alleging the conspirators had defrauded him of $1,784. When Chick Gandil refused to report to the club in 1920, Collins took his job as the Sox regular first baseman and batted .303, a career-best. Prior to the 1921 season, he was traded along with Leibold to the Red Sox for Hall of Famer Harry Hooper. He ended his playing days after parts of five seasons in Boston.

In his career, Shano was among league leaders in doubles, triples, and RBI several times while stealing 225 bases. The similarity scores method shows Dave Philley as the closest comparison. After his playing days, he managed the Red Sox in 1931 and 1932. He also managed at Des Moines and Pittsfield in the minors.

He earned the nickname "Shano" (pronounced SHAWN-oh) as a variation on "Sean", the Gaelic version of "John". He was the grandfather of Bob Gallagher.