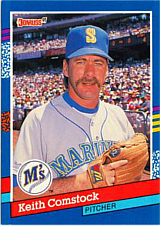 "Todd said I needed to tell the young guys what I wanted to do. You had to sign a contract to do the baseball card, which covered a bunch of stuff and said you agreed that your photo would show up in the set. Todd told me, "You're the veteran," and said I needed to tell the guys in the clubhouse that they shouldn't sign their card contracts unless this photographer allowed me to get a ball to the crotch. So many of those guys were future major leaguers, and it was pretty obvious the card company needed them in the set. So I did it. I went to the clubhouse, told the guys my idea about the ball and said they shouldn't sign their contracts unless I got this picture taken. They didn't hesitate. It wasn't like some movie moment, though. I didn't mandate anything from them. I wasn't Mel Gibson in "Braveheart." There was no chanting or cheering. Like I said, these guys were 30 minutes from leaving the clubhouse. They were like, "Go ahead." I'm sure they didn't really care." - Keith Comstock, to ESPN in 2019, about the trials and tribulations of getting his legendary minor league trading card made, which features him taking a "comebacker" to the groin. 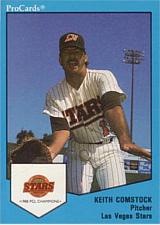 Keith Comstock was a journeyman reliever over parts of six big league seasons. In 1990, he put together his finest season out of the Seattle Mariners bullpen.

In retirement, Keith was pitching coach for the Burlington Bees from 1995-1996 and the San Jose Giants in 1997. He managed the 1998 Salem-Keizer Volcanoes, moving on to skipper the Bakersfield Blaze in 1999, the San Jose Giants in 2000 and the 2001 AZL Giants. He was pitching coach for the Cedar Rapids Kernels in 2002, Arkansas Travelers in 2003, Rancho Cucamonga Quakes in 2004 and Arkansas again in 2005. He became a roving instructor in the Los Angeles Angels minor league system in 2006. In 2007, he the pitching coach of the Spokane Indians. After the 2007 season, he was named rehab pitching coordinator by the Texas Rangers, a position he still held in 2019.

Keith is the great grandson of Anthony Comstock, the former United States Postal Inspector. Keith's brother, Brad Comstock, was a pitcher in the Giants chain from 1987-1988.